Oil prices are on course to climb 10 percent this week as Hurricane Delta shuts in over 90 percent of production in the Gulf of Mexico, leading some analysts to claim prices are set for a breakout. 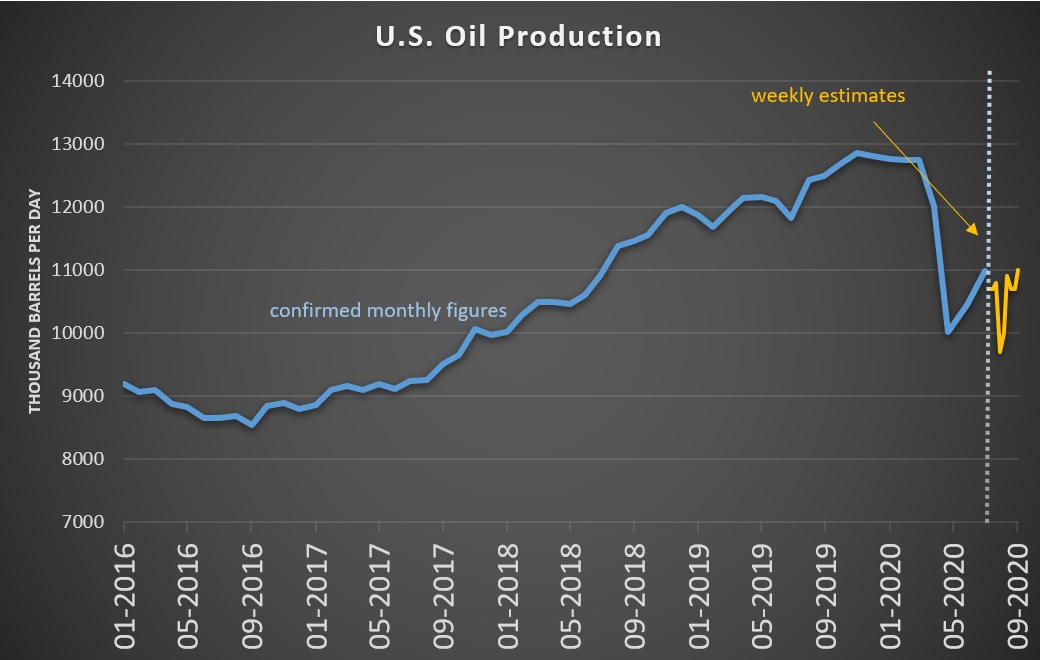 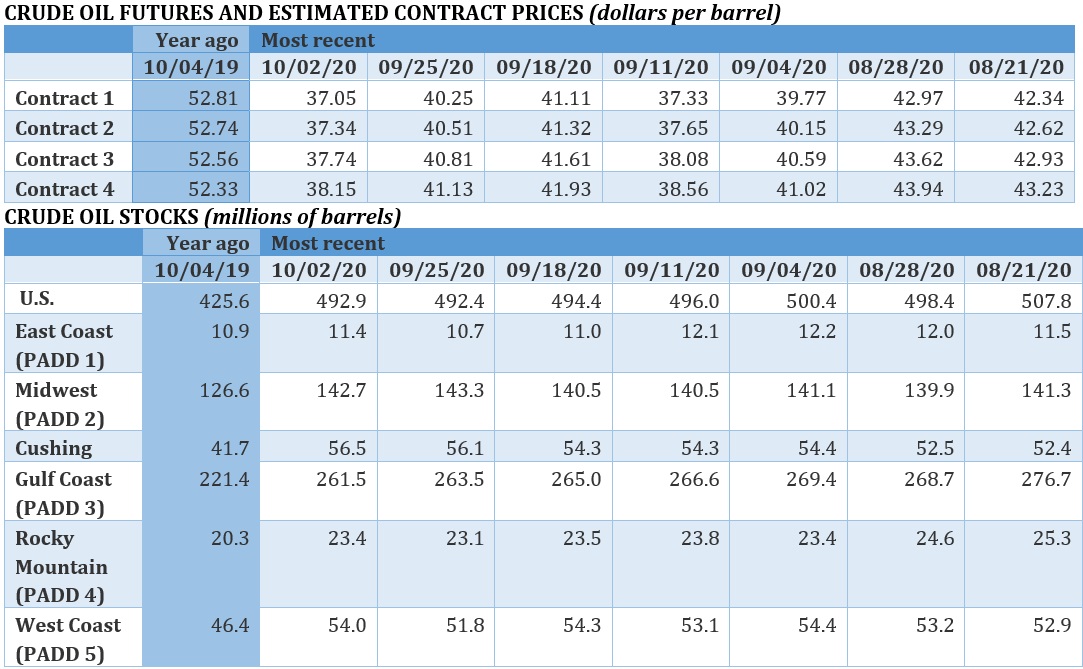 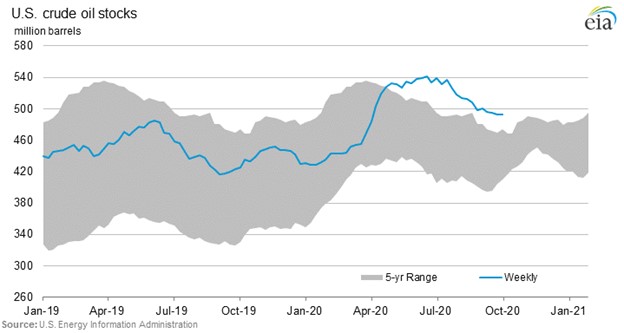 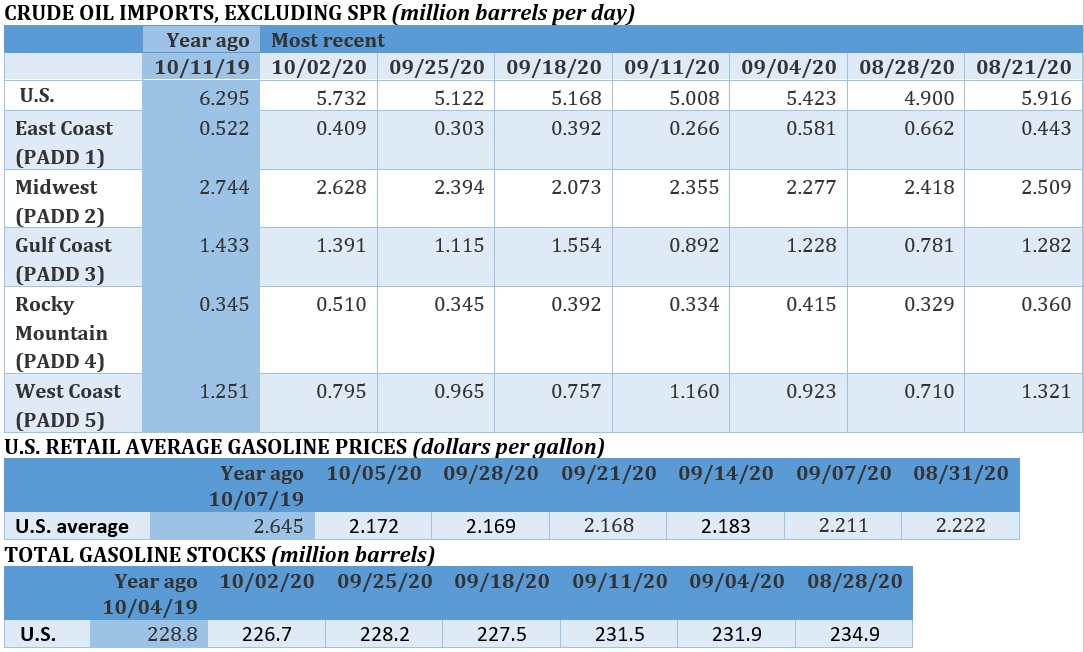 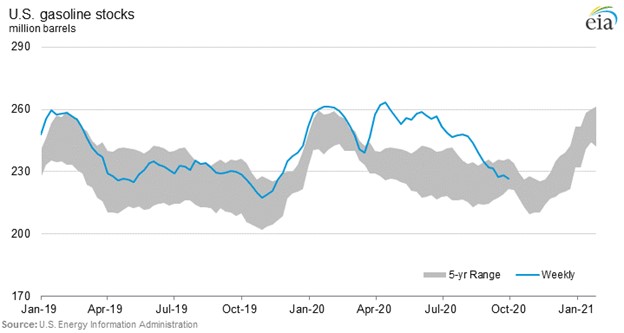 Oil prices have posted strong gains this week, although opened trading on Friday slightly down. WTI was trading at $41 and Brent was close to $43, putting crude close to a 10 percent gain from last week.
Aramco doubles down on oil. Saudi Aramco (TADAWUL: 2222) intends to increase oil production in the years ahead in an attempt to monetize its oil reserves with an eye on peak demand. Even in a world of lower oil prices, Saudi Arabia has some of the lowest production costs in the world, allowing it to undercut the competition. Aramco is aiming to increase its production capacity to 13 mb/d from 12 mb/d currently.
Oil prices unlikely to collapse. The oil market has already priced in the slowing global demand recovery and the growing uncertainties about the economy amid resurging coronavirus cases in many parts of the world. Analysts largely concur that oil prices are not expected to move much higher than current levels of around $40 a barrel until the rest of the year, but neither are they likely to fall much as bearish factors have been priced in.
Election not moving oil prices. The U.S. is entering the final weeks of the presidential election, but energy markets have not noticeably moved on shifting fortunes of the candidates. Going by most poll results, a Biden landslide victory is looking more likely than a Trump win. But the oil market couldn't care less. Here's why.
Oil traders to cut emissions. The world's biggest commodity and energy players launched an initiative to cut emissions by 50 percent from 2008 levels by 2050.
Refiners struggle as jet fuel and gasoline diverge. Gasoline demand has rebounded, but jet fuel demand remains depressed. Refiners have trouble producing one without the other, and the two-speed recovery is squeezing margins.
Hurricane Delta knocks energy offline. Hurricane Delta weakened over the Yucatan Peninsula but strengthened again in the Gulf of Mexico to a Category 3 storm. Oil producers have evacuated 272 offshore platforms as of Thursday, or 42 percent of the total in the Gulf.
Venezuela's rig count falls to zero. Venezuela's rig count has fallen to zero, and the country's oil sector is in a state of total collapse. The New York Times profiles some of the destruction.
From "petrostates" to "electrostates." In an essay in Foreign Policy, Columbia University's Jason Bordoff lays out some of the geopolitics of energy as the world transitions to low-carbon fuels. He argues there is a lot more nuance than the conventional wisdom suggests - Middle East oil producers won't collapse, Russia is not destined for disaster, and the politics of clean energy are much more complex than at first glance.
Norway's oil strike could end as sides meet. Oil companies and labor officials agreed to use a mediator to meet on Friday in a bid to end a worker's strike that knocked 25 percent of Norway's oil offline.
Chevron surpasses ExxonMobil. Earlier in the week, ExxonMobil (NYSE: XOM) briefly saw its market cap dip below that of NextEra Energy (NYSE: NEE), a renewables developer. A few days later Chevron (NYSE: CVX) briefly surpassed Exxon. Exxon reclaimed a higher market cap, but not since the days of Standard Oil has Exxon fallen from its perch.
Nord Stream 2 hits uncertainty after Poland $7.6 billion fine. Polish regulators fined Nord Stream 2 $7.6 billion over competition concerns. The move wonâ€™t prevent the physical construction of the pipeline, which is near completion, but it further poisons the political atmosphere.
Total invests in fuel cell truck startup. Total (NYSE: TOT) is planning on selling its resin business to free up cash as it tries to transition to renewables. The French oil giant is also making an investment in a fuel-cell truck startup, Hyzon Motors.
Chevron to eliminate jobs. Chevron (NYSE: CVX) is asking its workers to reapply for their jobs as the company seeks to cut 15 percent of its workforce, according to Reuters.
Trump admin announces new Iran sanctions. The U.S. announced new sanctions on Iran's financial sector, a move that critics say could have humanitarian consequences. Meanwhile, Bloomberg reports that a potential Biden administration could see a return of Iranian oil supply if the two countries return to a nuclear agreement.
OPEC sees peak demand. For the first time, OPEC acknowledged the likelihood of peak oil demand, although the cartel says that the date won't come for about 20 years.
Tesla aims to produce 500,000 cars. Elon Musk says that Tesla (NASDAQ: TSLA) has a chance of producing half a million cars this year.
Record renewables installations this year, 2021 uncertain. The EIA estimates that solar and wind capacity could grow by a record 37 GW this year, more than doubling the previous annual record of 17 GW set in 2016. Part of the massive growth is the result of developers trying to get ahead of expiring subsidies. But growth is expected to decelerate in 2021 and beyond unless supportive policy returns.
Argentina faces gas shortage. Argentina's natural gas production is sliding and could result in shortages next winter unless production rebounds.
Udall leads list for Biden's Interior. Retiring New Mexico Senator Tom Udall (D) is on the shortlist to head the Department of Interior in a potential Biden administration.
Judge strikes down methane rule. A federal judge struck down an Obama-era rule on methane emissions on oil and gas operations on BLM lands.
Amazon reveals Rivian truck. Amazon (NASDAQ: AMZN) unveiled an electric delivery truck being built by Rivian Automotive. Amazon aims to have 100,000 of them on the roads this decade, with the first tranche put into operation next year.
Energy Transfer's CEO Kelcy Warren steps down. Kelcy Warren is stepping down as CEO of Energy Transfer LP (NYSE: ET).