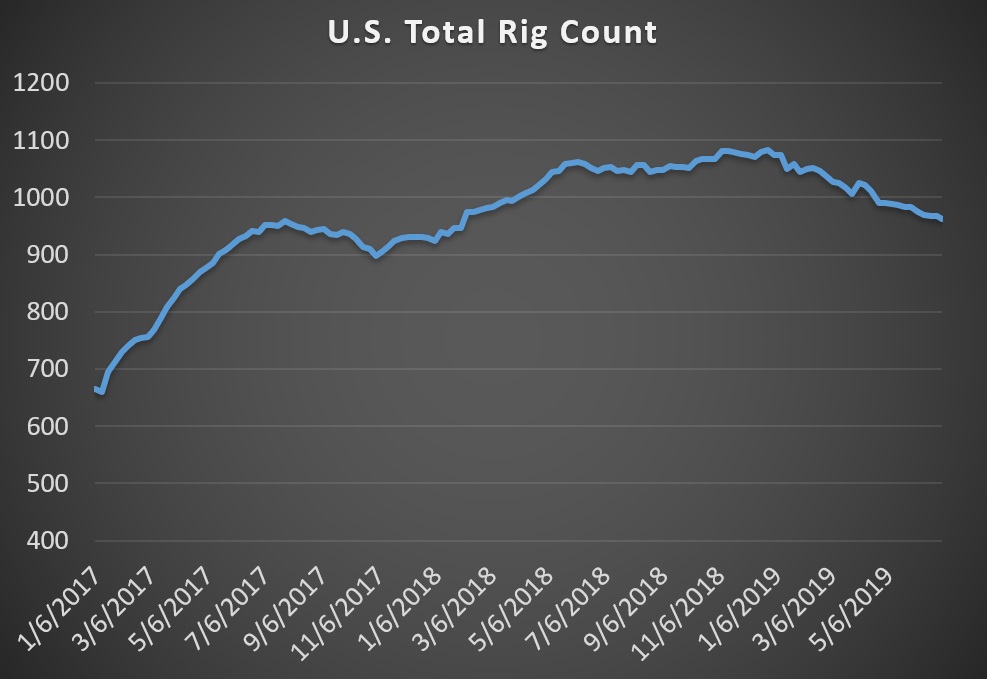 Tuesday July 9, 2019
Oil prices edged up at the start of the week due to the OPEC+ cuts and rising U.S.-Iran tension. Trade and economic concerns continue to keep prices in check, however.
Iran surpasses enrichment level. Iran said that it exceeded the 3.67 percent uranium enrichment level laid out in the 2015 nuclear deal, and in recent days exceeded 4.5 percent. Iran said that it would continue to pull out of parts of the accord on an ongoing basis until Europe delivers on some of the benefits laid out in the accord. The decision will increase tension with the U.S. and put pressure on Europe to carry out its promises to Iran. But it may also push Europe away and it increases the odds of punitive action from the EU.
Russia’s production dips on contamination. Russian oil production fell to a three-year low at the start of July, the result of lingering effects from the pipeline contamination crisis. “The Russian story definitely supports prices today. Market participants remain concerned that Russian compliance could deteriorate again, and lower Russian output together with elevated compliance from OPEC nations should rebalance the oil market faster,” said Giovanni Staunovo, oil analyst for UBS, according to Reuters.
Chinese refiners cut processing. China’s refiners are cutting runs after a wave of new refineries came online and created a glut of supply. Tepid demand is also exacerbating a fuel surplus. As a result, China’s oil imports could stagnate, a negative for the global oil market. “For markets that are already consumed with fears about a global recession ... headline numbers of oil demand growth slowing alongside talk of run cuts seem to reinforce a bearish narrative,” said Michal Meidan, a London-based analyst at Energy Aspects, according to Reuters.
EPA proposes higher biofuel requirement but doesn’t touch waivers. In a move that angered both sides of the ethanol versus oil refining battle, the EPA proposed higher blending requirements for refiners in 2020, but declined to scrap previously issued waivers. The Trump administration more than quadrupled the volume of waivers issued to refiners, roiling the market for ethanol and for credits that can be bought and sold by refiners.
UK seizure of Iranian tanker won’t go “unanswered.” Iran said that the seizure of its ship in Gibraltar by the UK won’t go “unanswered.” BP (NYSE: BP) reportedly rerouted one of its tankers heading for Iraq to Saudi waters over fears of retaliation.
Chevron’s bet on Venezuela. Despite an economic and political crisis and crippling sanctions, Chevron (NYSE: CVX) has not pulled out from Venezuela, even as most other international companies have already done so. Chevron received a waiver from the U.S. government to continue operating, and the company expects to profit from production if Maduro stays in power, or be first in line to a potential historic privatization if opposition forces take over. “They will try to hang on for as long as they can,” Francisco Monaldi, a fellow at Rice University’s Baker Institute for Public Policy, told Bloomberg. However, the company’s waiver from the U.S. government expires at the end of this month and its operations would be wrecked if the waiver is not extended.
Venezuela blackout knocks refinery offline. According to Argus Media, a blackout disrupted operations at Venezuela’s 940,000-bpd refinery, which could exacerbate fuel shortages.
Goldman Sachs: Shale keeps oil prices low through 2020. Ongoing production gains from U.S. shale means that supply will outstrip demand into 2020, according to Goldman Sachs. OPEC+ will help take some surplus offline, but that only offers more space for shale. “An exit strategy from the cuts was not discussed, and it remains to be seen whether the decision to extend cuts to accommodate shale growth will ultimately drive the need for deeper cuts in 2020,” the investment bank said in a note.
Possible tropical storm in Gulf of Mexico. A storm system in the Gulf of Mexico has an 80 percent chance of becoming a tropical in the next few days, according to the National Hurricane Center. “All three of our top models say something is going to form,” Jeff Masters, co-founder of Weather Underground, told Bloomberg. “If it does, it will take a track through the oil producing region from east to west making landfall near the Texas and Louisiana border.”
U.S. and China to relaunch trade talks. Trade negotiations are set to restart this week after two months of American and Chinese negotiators refusing to talk. However, despite the Trump-Xi “truce,” there is little clarity on how the two sides will proceed. The same points of contention remain. “The pressure for one side to give into the other is diffused right now. I expect this to drag out for months,” Derek Scissors, a China expert at the American Enterprise Institute, told Reuters.
BASF shares plunge on earnings hit. German chemicals giant BASF saw its shares plunge by more than 7 percent after it said that its earnings could fall by as much as 30 percent because of the economic slowdown and trade war. “Everybody expected a warning. But not to that extent. ...Really disastrous numbers,” one trader told Reuters.
VW to buy $56 billion in batteries. VW is creating joint ventures with battery makers for its aggressive push into electric vehicles and will spend around 50 billion euros (~$56 billion) on battery cells. The German automaker said that it will need 150 GW of battery production capacity by 2025 in Europe, and another 150 GW in Asia. Those figures will double by 2030. VW said it would overhaul 16 factories to create EVs and will roll out 33 different models by 2023. Meanwhile, VW and Ford (NYSE: F) are set to sign an agreement to share the cost of developing autonomous vehicles and producing EVs.

Passing The Torch To The Millennial Generation

CHAMS Notifies of the Company’s Board Meeting and Closed Period

PORTPAINT Notifies of the Company’s Board Meeting and Closed Period

MTNN Notifies of the Company’s Board Meeting and Closed Period