While oil prices have rebounded from the record lows they hit last week, the rebound is likely to only be temporary as more bearish news piles up. 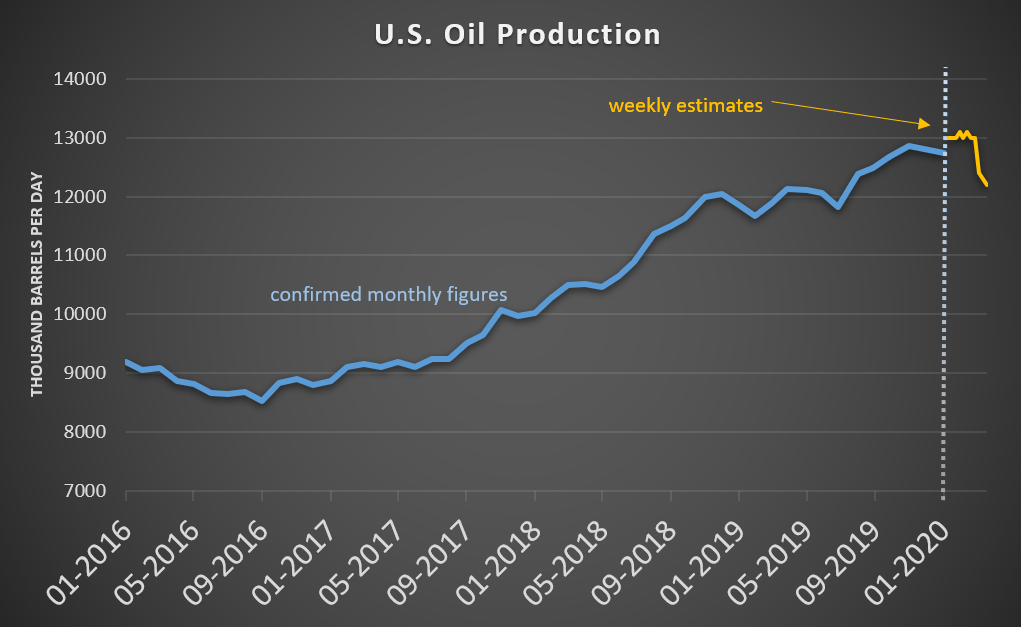 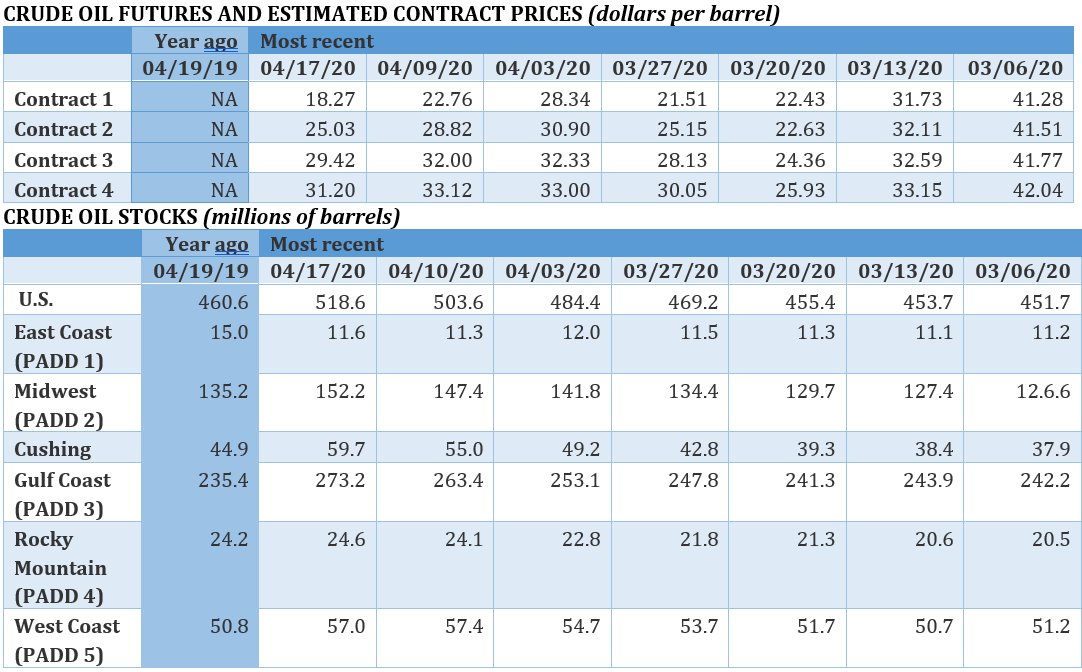 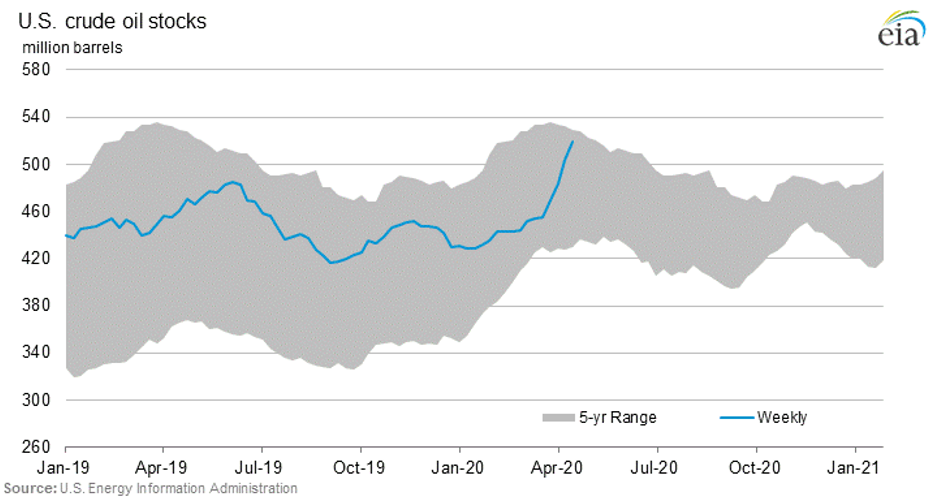 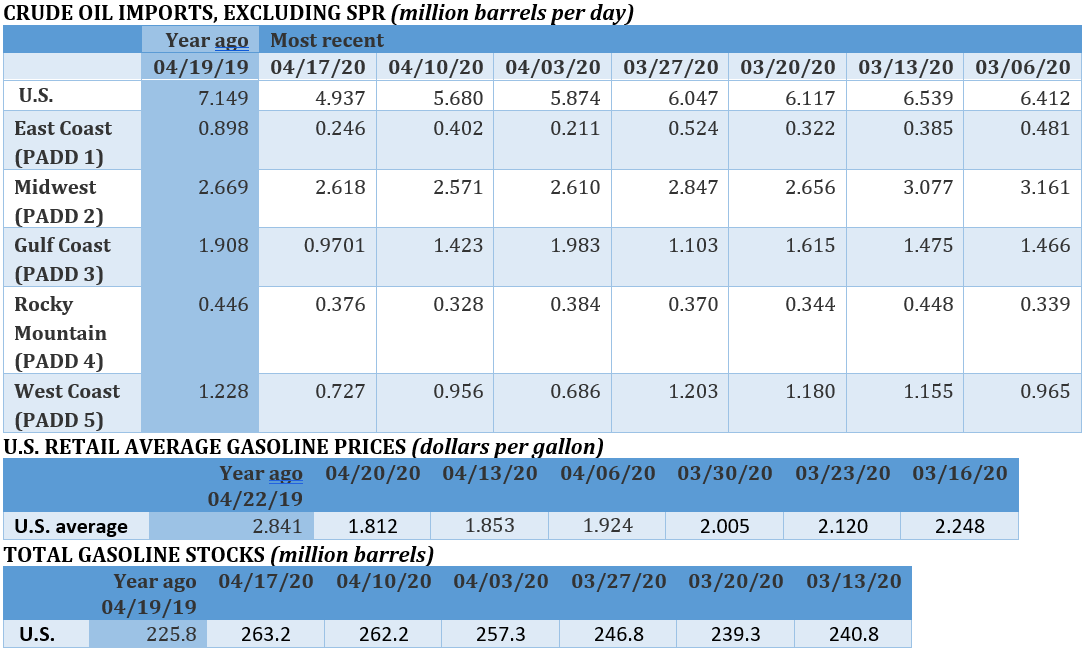 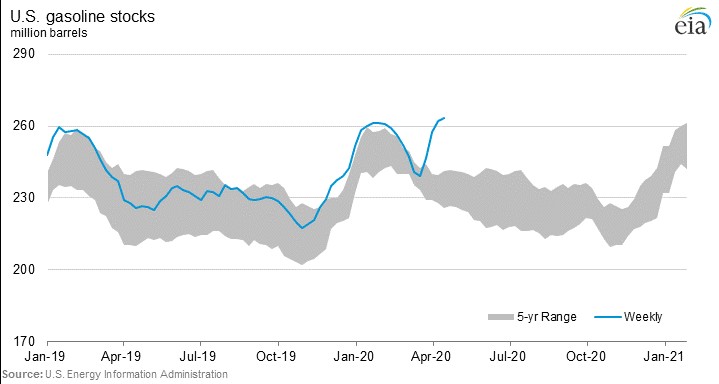 Oil prices stabilized by Friday after arguably the wildest week in the history of the oil market. But the slide is still far from over.
Continental Resources halts production, declares force majeure. Continental Resources (NYSE: CLR) has stopped most of its production in North Dakota. Harold Hamm's firm is mostly unhedged, exposed to extremely low market prices. Continental told at least one refiner that it couldn't deliver a shipment of oil because negative prices constituted "waste." Refiners are not pleased. "It is the height of hypocrisy for a company to choose not to honor its contracts to supply domestic crude to refineries while also demanding the administration impose restrictions on foreign crude," the American Fuel and Petrochemical Manufacturers, a trade group representing refiners, told Bloomberg.
U.S. considering lending program for oil companies. Treasury Secretary Steven Mnuchin said he's considering creating a government lending program for U.S. oil companies. "Investment-grade companies will be able to either access the normal capital markets or will be able to access the Fed's investment-grade facility," he said. "That's the priority." Non-investment grade companies may seek "alternative structures with banks," he said.
Mexico to shut down wells. After making a big deal out of not agreeing to the OPEC+ cuts, Mexico said it would shut down new wells because of low prices. "Now that oil has no value, we can shut down the valves," Mexico's president said. State-owned Pemex was downgraded to junk by both Moody's and Fitch on Friday.
Cushing all booked. Storage at the key oil hub of Cushing, Oklahoma technically has available storage, but it is just about all under contract for leasing, according to Reuters. That means that there is essentially nothing left for anybody else.
Big Oil dividends at risk. Equinor (NYSE: EQNR) cut its dividend by two-thirds this week. Other oil majors will be scrutinized by investors when they begin reporting earnings next week. "The look back into what was a weak first quarter seems almost irrelevant. The game plan for dealing with the next three months and the next 18 months is going to be the focus," said Jefferies analyst Jason Gammel, according to Reuters.
Argentina plans higher oil price. Argentina plans on decreeing a $45-per-barrel price for its domestic producers in order to keep the industry alive.
Hackers have oil industry in cross hairs. Hackers have launched spear-phishing campaigns against oil and gas firms to infiltrate with a spyware for the purpose of collecting sensitive company information and credentials, Bitdefender researchers have found.
Oil ETFs slammed. Roughly $6.2 billion has flowed into the U.S. Oil Fund (NYSEARCA: USO) so far this year. Retail investors, clearly confused about the nature of oil ETFs, have flooded into the funds, betting on rising oil prices. But when the market is in a steep contango, ETFs end up selling low and buying high. A leveraged 3x oil fund also shut its doors.
Eni cut production and spending. Eni (NYSE: E) cut spending by 30 percent and lowered planned 2021 spending by 30-35 percent. The company lowered production guidance to 1.75-1.8 mb/d for 2020, down from 1.9 mb/d previously. When asked about the company's dividend, Eni's CEO was non-committal.
Negative oil a risk for banks. Negative oil prices have broken the models that banks use for their trading books. "It's a huge issue for banks if they cannot produce risk metrics correctly," Richard Fullarton, founder of Matilda Capital Management, told Bloomberg. Meanwhile, Marex Spectron, a large commodities broker, said it would restrict its customers from taking positions in expiring futures contracts, allowing only for "liquidation of existing positions."
Regional oil economies at risk. Wyoming, Alaska, Oklahoma, North Dakota and West Virginia all depend more on mining and energy extraction than Texas, according to the Wall Street Journal. For example, energy and mining accounts for 16.4 percent of Wyoming's GDP.
Baker Hughes cuts jobs and spending. Baker Hughes (NYSE: BKR) cut jobs and spending by 20 percent. The firm expects oil field activity to fall by half this year. The company reported a first-quarter net loss of $10.2 billion, made worse by a $14.7 billion impairment.
LNG cancellations to soar in June. A large number of LNG cargoes are expected to be canceled between June and October.
China to cut EV subsidies 10 percent. China said it would cut subsidies for EVs by 10 percent this year.
Half of 60 independent oil companies need liquidity. Half of the largest 60 independent U.S. oil producers will need cash in order to stave off bankruptcy, according to energy lawyers at Haynes and Boone. "The reverberations from this price collapse will be felt throughout the industry and by everyone who provides services to the industry," Buddy Clark of Haynes and Boone told Reuters.
Pipeline delays after court ruling. The U.S. Army Corps of Engineers has suspended a nationwide program used to approve oil and gas pipelines after a court last week threw out a blanket permit, according to the AP. The decision put roughly 360 pending projects on hold.

Impact of Privatization on Nigeria's Economy