Oil prices held at a five-month high earlier this week, and only just managed to close the week higher as the crude complex is looking increasingly 'top heavy'. 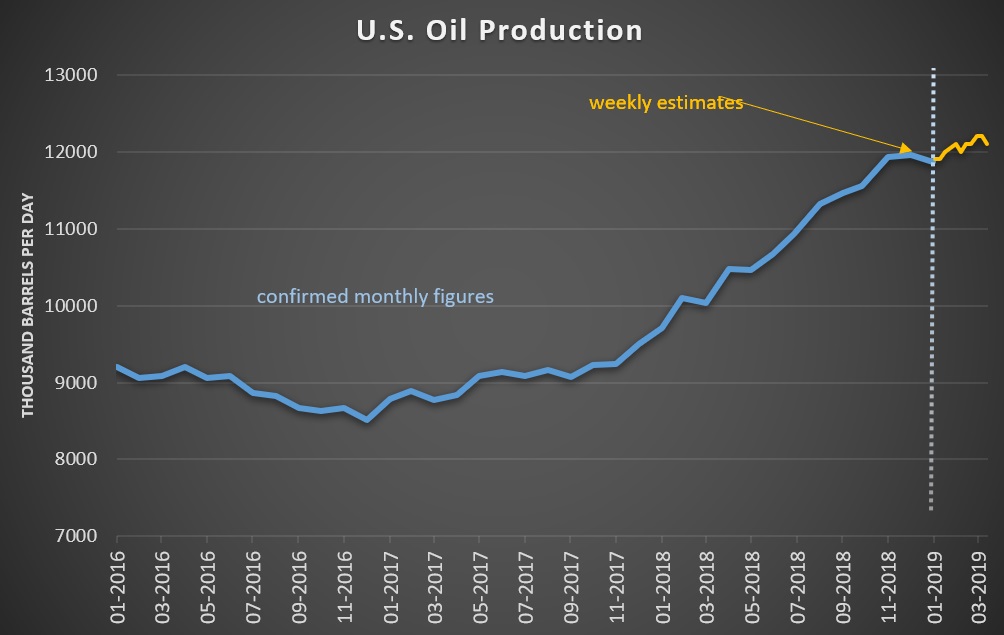 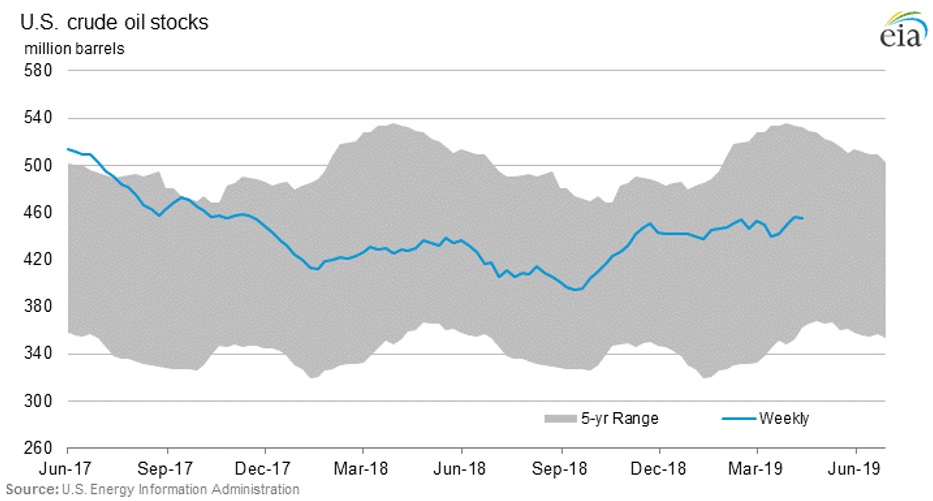 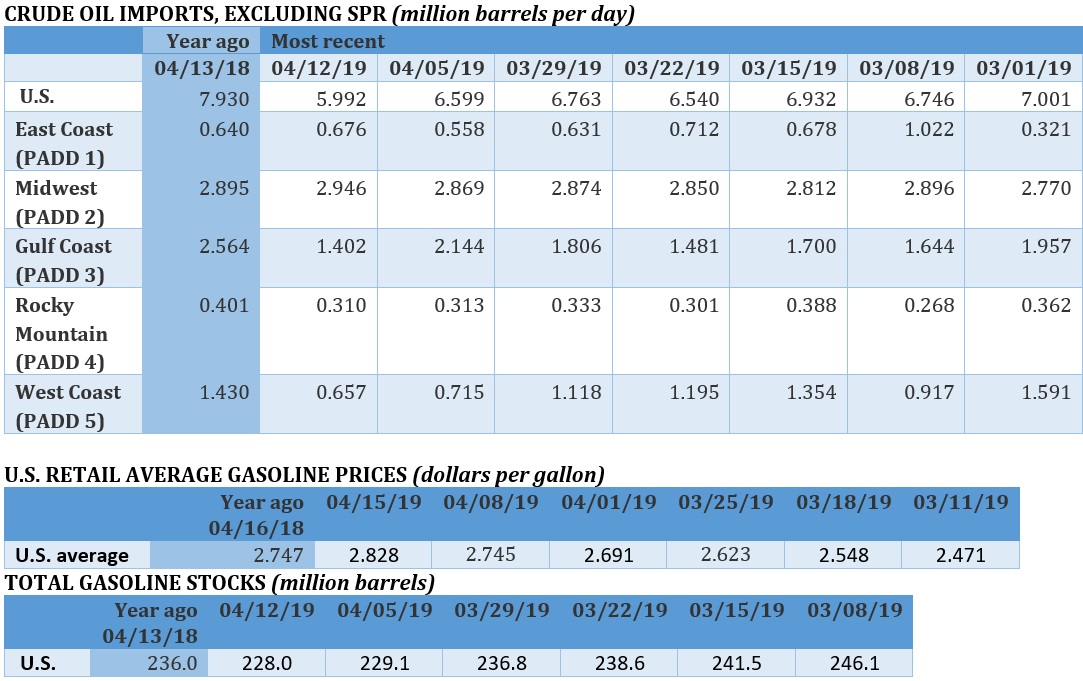 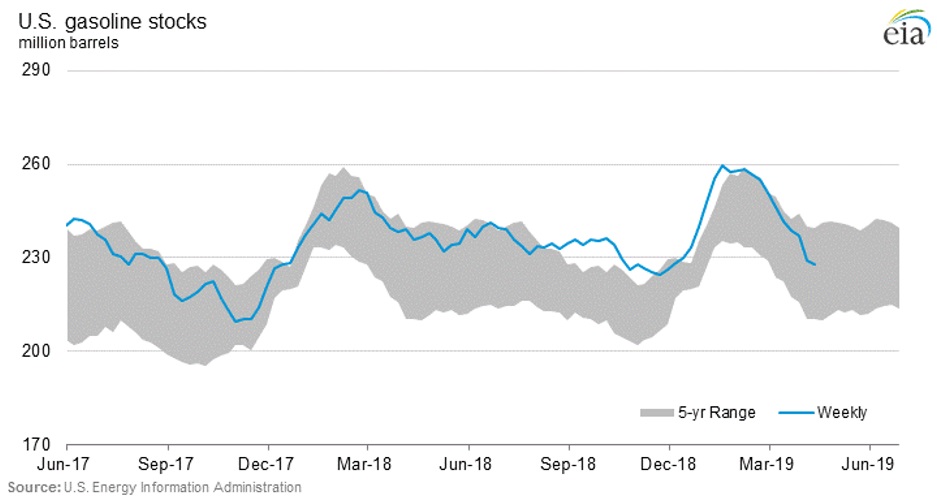 Oil held steady at the close of the week, with a slowdown in U.S. shale and the looming deadline for a decision on Iran sanctions waivers putting a floor under oil prices.
Schlumberger sees shale slowdown. Schlumberger said its earnings were hit in the first quarter by the drilling slowdown in the Permian, while market conditions globally continue to improve. Schlumberger sees “higher investments in the international markets simply to keep production flat, while North America land activity is set for lower investments with a likely downward adjustment to the current production growth outlook,” according to CEO Paal Kibsgaard. “the higher cost of capital, lower borrowing capacity and investors looking for increased returns suggest that future E&P investments will likely be at levels dictated by free cash flow.”
Rig count falls. The U.S. oil industry slashed its rig count by 8 rigs this week, bringing the total down to 825. The sharp decline put an end to two consecutive weeks of increases.
Trump spoke about oil with Abu Dhabi crown prince. President Trump spoke with the crown prince of Abu Dhabi and they talked about “contributions to the global energy markets as a reliable supplier of oil,” according to a readout of the call from the White House. Trump is expected to make a decision on Iran sanctions in the next week or two, and a hardline may require higher oil production from OPEC.
Venezuela sends oil through Russia. Venezuela is skirting U.S. sanctions by moving oil through Russia’s Rosneft. According to Reuters, PDVSA has passed invoices from its sales to Rosneft. Rosneft buys the oil at a discount and resells cargoes to international buyers at the full price. PDVSA receives the money upfront rather than at a later date.
Cooler temperatures push down electricity. Cooler than average temperatures are expected for this summer, and the U.S. could see lower electricity bills, according to the EIA. Relatedly, natural gas prices are near multi-year lows on expectations of record-breaking gas production this year.
Tellurian receives federal approval on $28 billion LNG project. Tellurian Inc. (NASDAQ: TELL) won federal approval for its $28 billion Driftwood LNG export terminal on the Gulf Coast, and Sempra Energy (NYSE: SRE) also got the go-ahead from regulators for its Port Arthur LNG project. The project approvals come even as the market for LNG has become oversupplied, amid a wave of new export capacity in the U.S., Australia and Qatar.
Saudi Aramco considers 20 percent stake in Indian refiner. Saudi Aramco is mulling a 20 percent stake in India’s Reliance Industries. Aramco has been stepping up investments in overseas refiners and petrochemical companies as a way of securing long-term buyers for its crude oil. India, in particular, is expected to be a strong source of demand growth going forward.
Petrobras reverses course, hikes diesel prices. Less than a week after Brazilian President Jair Bolsonaro decided against a price increase for diesel, Petrobras (NYSE: PBR) raised prices by 10 cents per liter and promised that it would remain free of political interference. When news broke that Bolsonaro opposed raising diesel prices last week, Petrobras’ share price plunged. The hike in prices was meant to send a signal to investors that the company would keep a keen eye on company finances, pursuing divestment and debt reduction.
Colorado Governor signs major oil and gas overhaul. Colorado’s Governor Jared Polis signed into law a major overhaul of the state’s oil and gas sector, granting more authority to localities over drilling operations and also reforming the mission of the state regulator to prioritize public health and environmental protection instead of promoting oil and gas development. The law is seen as a blow to the industry, but the silver-lining could be more certainty. “Today, with the signing of this bill, it is our hope that the oil and gas wars that have enveloped our state are over, and the winner is all of us,” Gov. Polis said.
ExxonMobil won three offshore blocks in Argentina. ExxonMobil (NYSE: XOM) won three offshore oil blocks in Argentina, in the Malvinas basin at the southern tip of the country. The closely-watched auction reportedly attracted offers from 13 companies for a combined $995 million.
Repsol suspends gasoline swap with Venezuela. Spain’s Repsol has suspended fuel swaps with PDVSA, fearing retaliation from American sanctions. Respol had been sending gasoline in exchange for crude oil, helping ease a fuel crisis in the country.
Kinder Morgan considers third Permian gas pipeline. Kinder Morgan (NYSE: KMI) is considering building a third natural gas pipeline for the Permian. “Demand to get gas out of the Permian continues to grow and the desire to unlock value that’s in oil and (natural gas liquids) continues to put pressure on need for additional takeaway capacity,” CEO Steven Kean said. “There is interest in pipe three.”
Europe imposes caps on CO2 for trucks. The European Parliament passed a 30 percent CO2 reduction target for 2030 and establish the first CO2 limits for heavy trucks.
Permian sees discounts for too much light supply. With the Permian overflowing with ultralight oil, refiners are beginning to demand discounts because of a mismatch with medium and heavy refining capacity. Reuters reports that ultralight oil has begun trading at a $1 to $2-per-barrel discount to WTI.