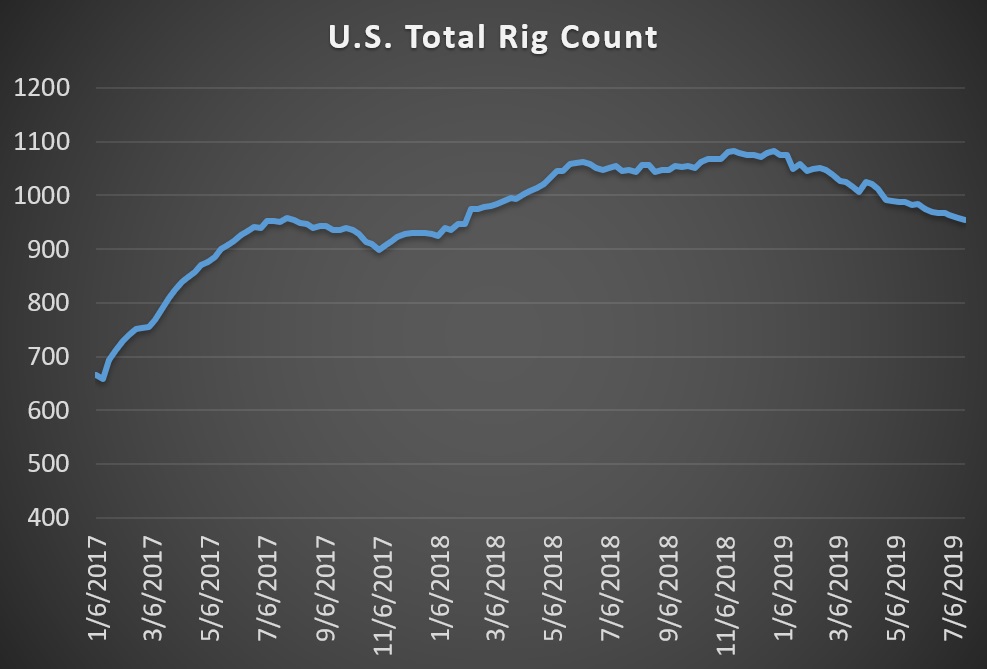 Tuesday July 23, 2019
Oil prices initially traded up on Monday on geopolitical tension in the Middle East, but gave up some of those gains on fears of an oil glut. At the start of Tuesday, oil prices dipped further, weighed down by demand fears.
Tanker tension continues. The tit-for-tat tanker seizures between the UK and Iran has heightened tension, but unlike last month, there appears little chance of and no appetite for a military confrontation. Tension in the Persian Gulf remains elevated, but oil prices have barely budged, not least because of ample global oil supplies. “The response of oil prices to the seizure of a British oil tanker by armed Iranian forces near the Strait of Hormuz has been amazingly muted so far,” Commerzbank said. “It appears that the majority of market participants are convinced that there will be no open conflict between the West and Iran.”
Houston oil prices drop on new pipeline capacity. WTI based in Houston fell to its weakest level in almost a year after new pipelines came online, according to Reuters. New lines owned by EPIC Crude Pipeline LLC and Plains All American Partners LP (NYSE: PAA) began filling up in recent days, Reuters reports. The new supply eases bottlenecks and pushed Houston prices lower. “Houston prices should weaken with more supply and limited new storage at refineries,” a trader told Reuters. WTI at Magellan East Houston (WTC-MEH), or MEH, fell to a $4-per-barrel premium to WTI, the smallest premium since August 2018.
Tanker seizures hit shipping industry, but oil prices muted. Oil prices traded up on Monday, but gains were relatively minor in light of the seizure of a British oil tanker by Iran. The seizure comes as retaliation for the British seizure of an Iranian tanker earlier this month. Oil prices have not spiked, as they might have in the past, but the shipping industry is bearing the brunt of the fallout. “Shipping and insurance costs have already been on the rise and the latest event will only add to that,” Amrita Sen of Energy Aspects told the FT. “Asian refiners in particular will be even keener now to search for alternative oil supplies and ship owners will look for alternative routes where possible, further adding to costs.”
Federal judge says climate case against oil industry can continue. A U.S. federal judge ruled against multiple oil companies, saying that the state of Rhode Island can proceed with its climate liability case against the companies. The judge said that the federal government didn’t have jurisdiction, allowing states to bring cases. In this instance, it involves 21 companies, including Chevron (NYSE: CVX), BP (NYSE: BP) and Royal Dutch Shell (NYSE: RDS.A).
U.S. sanctions on Chinese oil trader. On Monday, the Trump administration announced sanctions on Chinese state-owned oil trader Zhuhai Zhenrong Co. for violating U.S. sanctions on Iran. China has continued to stockpile oil from Iran, despite the U.S. ending waivers in May. The move may also add yet another point of contention between the U.S. and China has they seek to negotiate a resolution to their trade war.
Libya restarts Sharara field. Libya’s largest oil field was briefly knocked offline at the end of last week, but was quickly restarted. If Libya can manage to bring production online and maintain it, the increase would exacerbate the global glut. However, that all largely depends on a resolution to the civil war.
Demand weighs on oil. Despite tension in the Middle East, oil continues to languish, with WTI stuck in the mid-$50s and Brent in the mid-$60s. “The market seems obsessed with demand fears,” Commerzbank said in a note. Consultancy FGE cut its demand forecast down to as low as 740,000 bpd for 2019 and 920,000 bpd in 2020, much lower than the prevailing estimates from the EIA and IEA.
Cheap natural gas is killing coal. The story of cheap natural gas killing coal is not a new one, but the recent plunge in gas prices in Europe – aided by a glut of LNG – is accelerating coal’s decline. At the same time, the sharp increase of carbon prices in Europe has slashed coal use this year. Coal use in Italy, France, Germany, Spain, Portugal and the UK was down 40 percent in the second quarter, year-on-year. “Closing coal capacity is a theme that is developing momentum in Europe,” Lueder Schumacher, a utilities analyst at Societe Generale SA in London, told Bloomberg. “Be it for environmental or economic reasons, coal just can’t compete at these carbon prices.”
China’s CNOOC signs deal with ADNOC. China’s state-owned CNOOC signed a memorandum of understanding with Abu Dhabi National Oil Co. (ADNOC) for oil exploration, refining, and LNG trade.
BP teams up with Bunge on bioenergy. BP (NSYE: BP) and commodities trader Bunge Ltd. (NYSE: BG) will merge their sugar and ethanol operations to create the world’s third largest sugarcane processor, according to Reuters. It will also be the largest deal in Brazil’s bioenergy sector in 8 years.
Kashagan could expand. The consortium behind the Kashagan oil field in Kazakhstan, one of the largest and most expensive oil projects in the last few decades, could expand production from 370,000 bpd to as much as 450,000 bpd.
EV sales rising in Europe. EV sales are surging in Europe, but are set to climb even more as a wave of new EV models hit the market in the next two years.