Oil prices continued to slide on Friday afternoon, despite a small decline in the U.S./Canadian rig count. 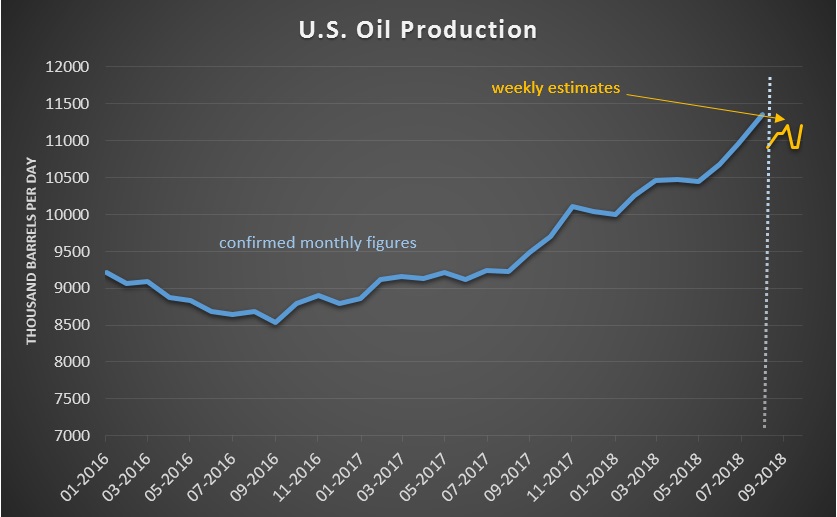 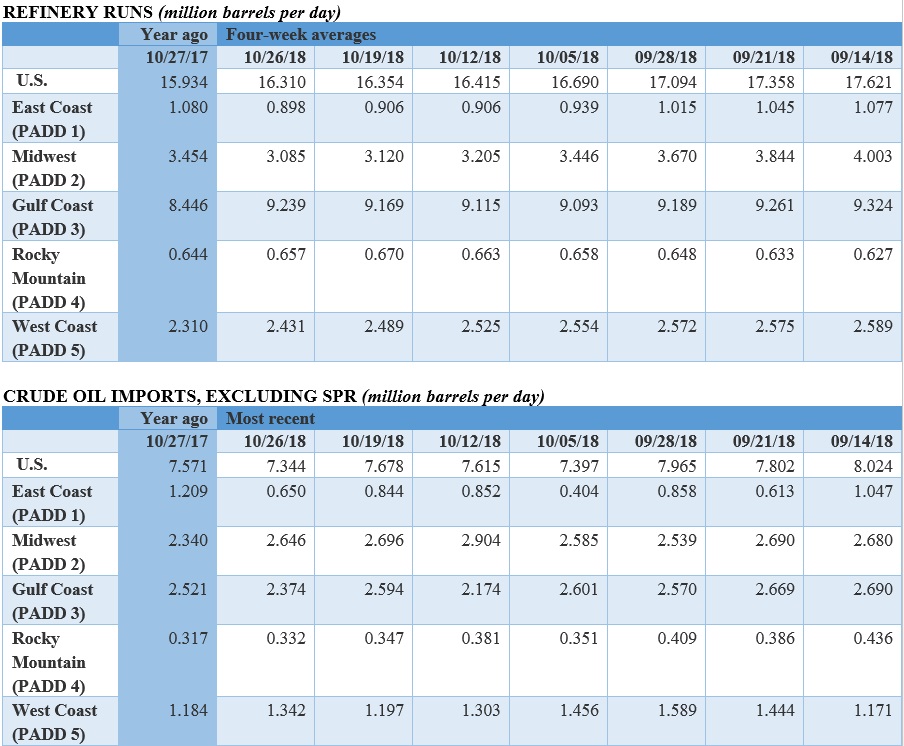 Friday, November 2, 2018
Iran sanctions are just days away but the market has come around to the idea that Iranian oil exports won’t be going to zero, despite months of promises from the Trump administration. New reports suggest waivers are in the offing. “Oil prices look to remain under pressure, as fears of global oversupply have returned with a vengeance,” Ashley Kelty, oil and gas research analyst at Cantor Fitzgerald Europe, told Reuters.
U.S. to grant waivers to eight countries importing Iranian oil. The U.S. has granted exemptions to eight importers of Iranian oil just days before sanctions on Iran take effect. The countries will be allowed to continue to import oil without fear of retribution from the U.S. as long as they continue to make reductions in those purchases, according to Bloomberg. Four of the countries include Iran’s top buyers – China, India, South Korea and Japan. The other four were not identified in the Bloomberg report, but the decision is expected to be announced on Monday.
U.S. oil production surges. The EIA said the U.S. produced more than 11.3 mb/d in August, a massive jump of over 400,000 bpd from a month earlier. The new record high also made the U.S. the largest oil producer in the world. Record output, combined with higher production from OPEC, has dealt sharp losses to crude oil prices amid mounting fears of oversupply.
Trump's admin sees “thaw” in relations with China. President Trump spoke with Xi Jingping by phone on Thursday, and Trump tweeted that the discussion went well. His economic adviser Larry Kudlow said that there was a “thaw” in relations. The two leaders are expected to meet later this month at the G20 summit in Argentina, and the conversation by phone this week raises the odds of a breakthrough on trade. Crucially, Bloomberg reports that Trump wants to reach a deal with Xi in Argentina, and he reportedly asked his cabinet to draft terms. However, hours after the phone call, the U.S. Justice Department unveiled charges against two Chinese companies for intellectual property theft, illustrating the difficult task of resolving differences between the two countries.
U.S. seeks to keep Middle East oil flowing. U.S. diplomats have reportedly stepped in to try to resolve disputes in the Middle East to increase oil flows. According to the Wall Street Journal, the U.S. is trying to broker a deal between Saudi Arabia and Kuwait over the Neutral Zone oil fields, which have 500,000 bpd of capacity but have been offline for years. The U.S. is also trying to help Iraq export more oil through Kurdistan, which would add another 300,000 bpd or so to global supplies. Washington is trying to ease these burdens at a time when it is seeking to shut in Iranian production.
EOG posts $1.2 billion in profit. EOG Resources (NYSE: EOG) posted an enormous $1.2 billion in third quarter profit, up more than ten-fold from the $100 million profit a year earlier. The performance is a strong vote of confidence in shale drilling, after years of red ink across the industry.
Continental Resources doubles resource estimate. Continental Resources (NYSE: CLR) doubled its estimated recoverable resources to 30-40 billion barrels, up from the previous estimate of 20 billion barrels set in 2011. “With today's completion technology we are recovering 15% and potentially 20% of the oil in place on a primary basis,” Continental’s President Jack Stark said during today's earnings conference call. “This is substantially higher than the recoveries that we thought possible back in 2011.”
Tanker rates up on higher OPEC production. Tanker rates are rising as OPEC ships more oil, pushing day-rates up to $51,000, up nearly three-fold from the $18,000 rates seen just a month ago.
Oil and gas sector needs consolidation. Top industry executives said that the oil and gas industry needs to consolidate, in order to reach scale, cut costs and streamline services. “There's a lot of smaller high-quality companies across industry where synergy and value can be captured” by combining, Chesapeake Energy’s (NYSE: CHK) CEO Doug Lawler said at the Deloitte Oil & Gas Conference, according to S&P Global Platts. “This will be a part of [Chesapeake's] strategy going forward.” Other top analysts and executives voiced similar sentiments, an indication that a new wave of M&A activity could be coming.
Petrobras could divest $20 billion. New Brazilian President Jair Bolsonaro has indicated he would not privatize Petrobras for now, but the company might still divest itself of some $20 billion worth of assets, according to a source for Reuters.
Economists: Brent to average $76 in 2019. A Reuters survey of 46 economists find an averaged predicted Brent crude price of $76.88 per barrel in 2019. The respondents see Iran sanctions putting a floor beneath oil prices, but weaker demand and a slower global economy putting a cap on prices.
OPEC production hits two-year high. OPEC production rose in October to its highest level in nearly two years. Higher output from Saudi Arabia, Libya and the UAE pushed production up 390,000 bpd compared to September’s levels. The figures gave the market confidence OPEC will be able to supply the market as Iranian production goes offline.
Oil majors post huge earnings. The third quarter earnings for the oil majors were the strongest in years, with a significant jump in profits. Cost-cutting and higher oil prices led to a windfall for the world’s largest oil companies. Most of them are sticking with a plan of capital discipline, with an emphasis on boosting shareholder returns.
Venezuela’s refinery utilization plummets, leading to fuel shortages. Venezuela’s refineries are operating at low levels as the nation runs short on crude oil. Refineries have averaged a meager 17 percent utilization rate this year, according to Bloomberg, down from 50 percent last year and 70 percent in 2016. Gas shortages have spread quickly and there is no end in sight for the crisis.

3.      Dangote Refinery to Save Nigeria from Dirty Fuels With Euro V Specification

4.      The World Bank, Red Flags And the Looting of Nigeria’s Oil Revenues - The Seven Energy Web

6.      The Illogical World of Nigeria’s Oil And Gas Industry