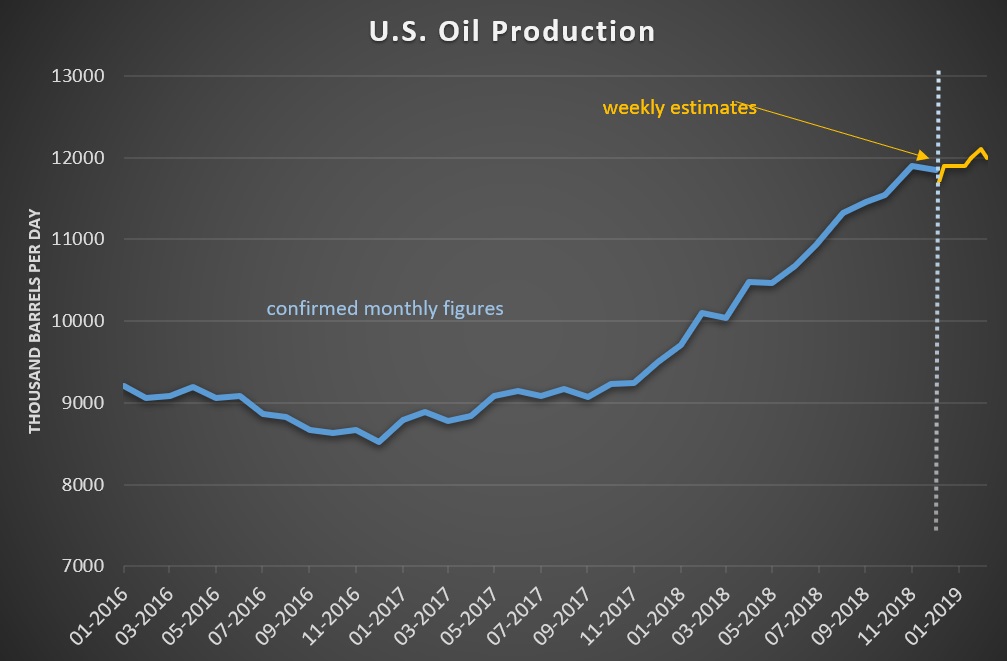 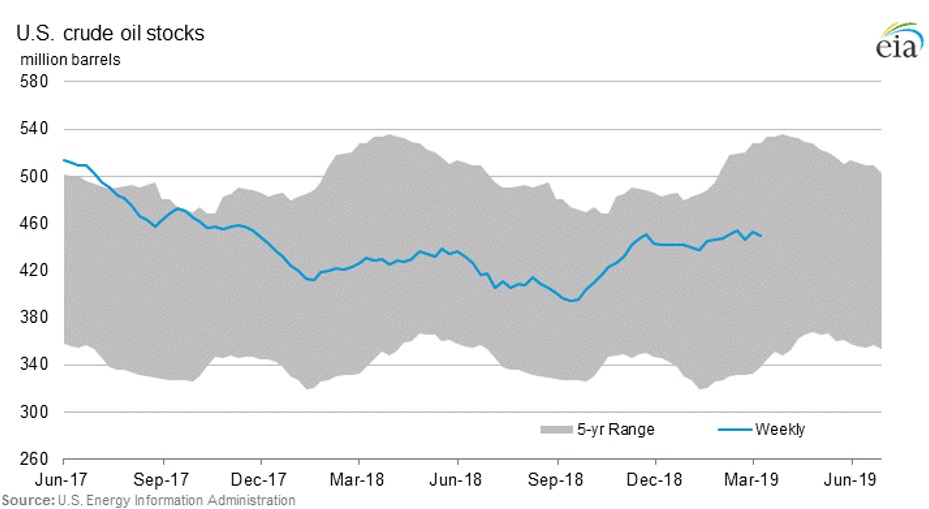 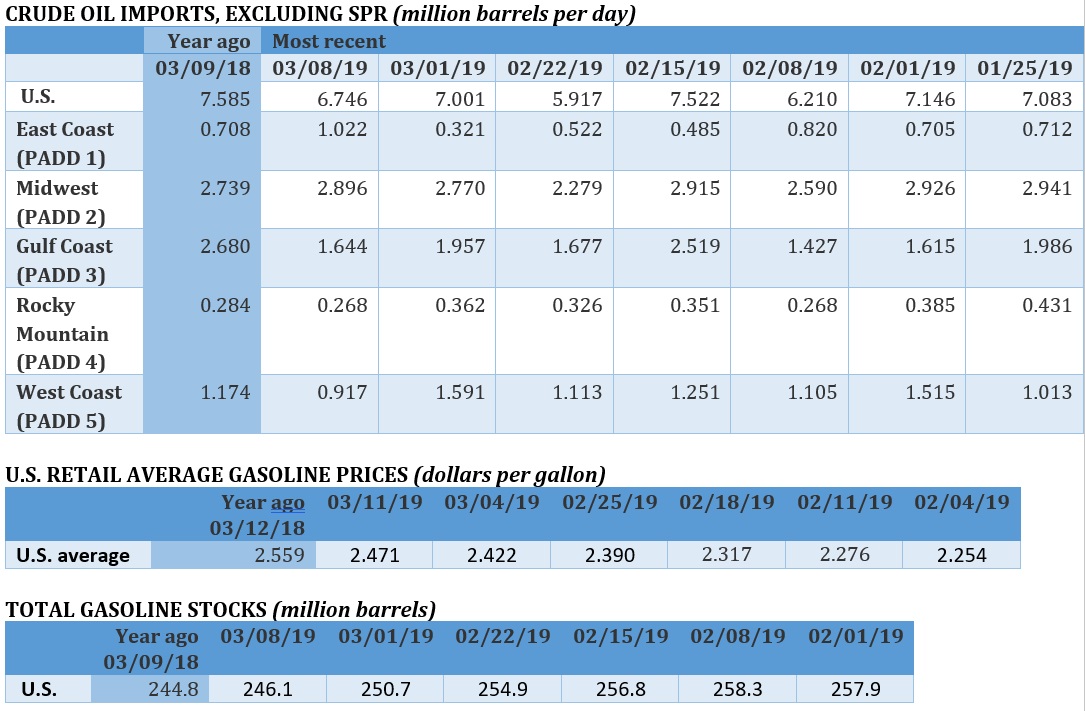 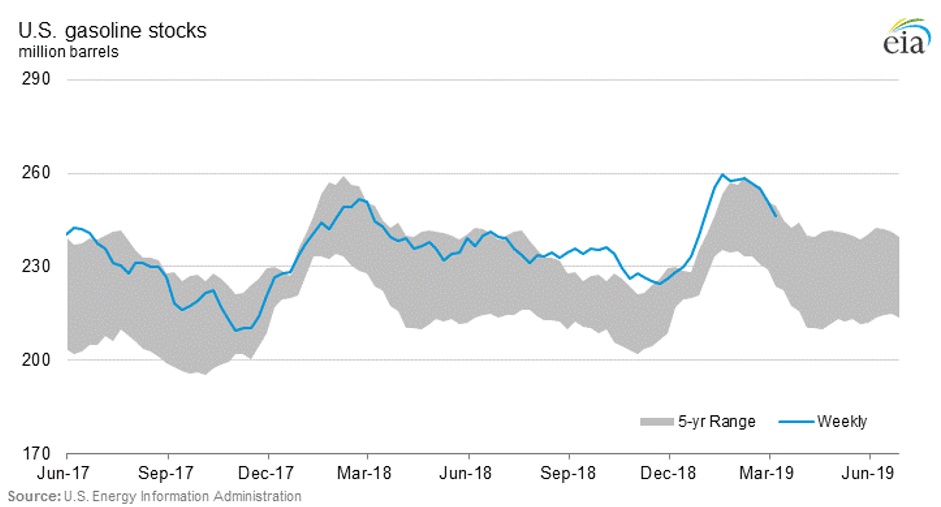 Oil prices have surged to their highest level in months, with WTI rising above $58 per barrel and Brent trading north of $67. The instability in Venezuela and the growing evidence of a slowdown in U.S. shale have pushed prices up.
U.S. production dips. Weekly figures show that U.S. oil production dipped to 12 mb/d last week, down from 12.1 mb/d the week before. The figures are just estimates, and are rounded off to the nearest 100,000 bpd, but they at least offer an indication that the explosive growth could be slowing down.
Venezuela’s Guaido proposes liberalizing oil sector. Opposition leader and self-proclaimed president of Venezuela, Juan Guaido, is working on overhauling the country’s oil sector if he gains power. The proposal would include weakening PDVSA and allowing a vastly larger role for private sector companies. The reforms would resemble those of Mexico over the past few years and would amount to a historic change, although for now, Guiado is still struggling to gain power.
OPEC lowered output in February. OPEC reduced production by 221,000 bpd in February, a more modest reduction than in prior months. Most of the reductions came from Venezuela, which saw output drop by 142,000 bpd. Meanwhile, OPEC estimated that OECD inventories rose by 22 million barrels in January, or 19 million barrels above the five-year average.
IEA: OPEC’s spare capacity a “cushion” for oil market. The IEA said that although the crisis in Venezuela is disrupting the oil market, the OPEC+ production cuts have rebuilt spare capacity, providing a “supply cushion” that can offset the turmoil. “Much of this spare capacity is composed of crude oil similar in quality to Venezuela’s exports,” the IEA said. “Therefore, in the event of a major loss of supply from Venezuela, the potential means of avoiding serious disruption to the oil market is theoretically at hand.”
U.S. hints at Iran waivers extension. The Trump administration’s lead envoy on Iran sanctions, Brian Hook, said that waivers granted to eight countries importing Iranian oil could be extended, as long as they demonstrate reductions in purchases. The U.S. is aiming to get Iran’s oil exports below 1 mb/d, a reduction of roughly 20 percent from current levels, but a far cry from “zero.” Higher oil prices are constraining the Trump team. “He has made it very clear that we need to have a campaign of maximum economic pressure ... but he also doesn't want to shock oil markets, he wants to ensure a well-supplied and stable oil market,” Hook said, referring to Trump.
OPEC warns shale drillers. Earlier this week, a group of top OPEC officials warned U.S. shale executives in a meeting on the sidelines of the IHS CERAWeek Conference in Houston that the NOPEC legislation working its way through the U.S. Congress could result in much higher levels of production from OPEC, which would crash prices. They made clear that without the ability to coordinate, they would produce at maximum levels.
Libya clash feared. Although Libya’s oil production is at multi-year highs and could rise even further, the division of the country between two governments could lead to a conflagration. The Libyan National Army (LNA) has piled up multiple victories on the battlefield, and analysts now fear it could turn its sights on the capital in Tripoli, where the internationally recognized government lacks the military might to fend off an invasion.
Investors to shale: “show me the money.” Investors continue to pressure the shale industry to demonstrate profits. Shareholders’ expectation “a couple years ago was ‘drill, baby, drill,’” John Hess, CEO of Hess Corp. (NYSE: HES) said Tuesday in an interview with CNBC at the CERAWeek conference. “Now it’s ‘show me the money.’” But spending cuts could translate into much lower production growth, he said.
Offshore decline rates top 10 percent. Decline rates at offshore oil fields worldwide grew significantly beginning in 2016 due to lower infill activity. Last year, decline rates reached nearly 10 percent, almost double the rate from 2015, according to Rystad Energy.
Canadian oil sands could slow on pipeline delays. MEG Energy Corp. (TSE: MEG) and Imperial Oil (TSE: IMO) are reconsidering expansions of oil sands projects in Canada due to the inability for the region to build a new long distance pipeline, according to Bloomberg. MEG had planned to bring an expansion online later this year, but the most recent delay of the Line 3 pipeline means that the “probability of that going ahead this year has decreased,” MEG said. “We don’t want to be building capacity into a system where we don’t have the ability to move it,” MEG’s CEO Derek Evans said in a conference call last week.
Exxon targets $15 breakevens for Permian. ExxonMobil (NYSE: XOM) plans on cutting the cost of production in the Permian to just $15 per barrel, putting it on par with some of the lowest cost oil fields in the world. The President of XTO Energy, a subsidiary of Exxon, said that the oil major’s scale could allow it to cut costs that low. He also said that the Permian’s total production, currently at 4 mb/d, could double by 2025. Exxon will deploy 55 rigs in the Permian this year, more than any other company.
Unrest in Algeria threatens more disruptions. No oil and gas production has been affected yet, but political unrest in Algeria has raised the risk of more outages at a time when the oil market is already reeling from disruptions.

Egypt to sell LNG in remarkable turnaround. Egypt’s state gas company EGAS tendered a sale for four LNG cargoes for April, only a few years after the country was forced to buy up LNG to plug a supply deficit. Egypt has lofty aspirations to build a gas hub in the Eastern Mediterranean.

19.  Bank Of America: Oil Demand Growth To Hit Zero Within A Decade