We will take a quick look at some of the critical figures and data in the energy markets this week.
We will then look at some of the key market movers early this week before providing you with the latest analysis of the top news events taking place in the global energy complex over the past few days. We hope you enjoy. 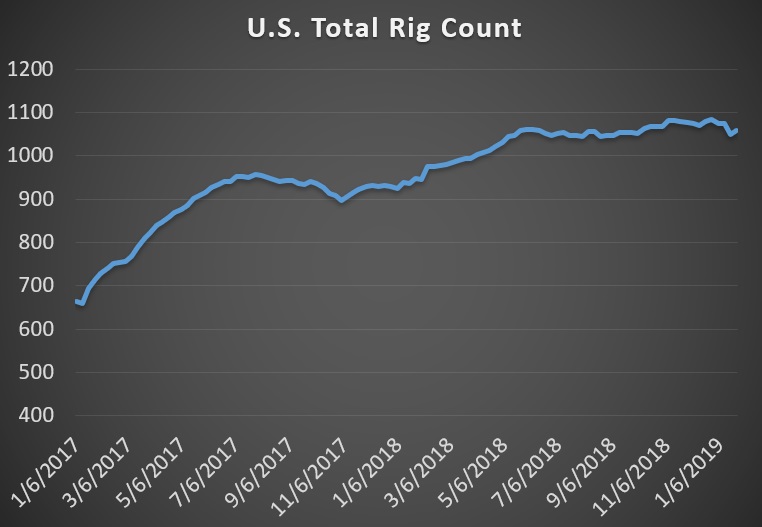 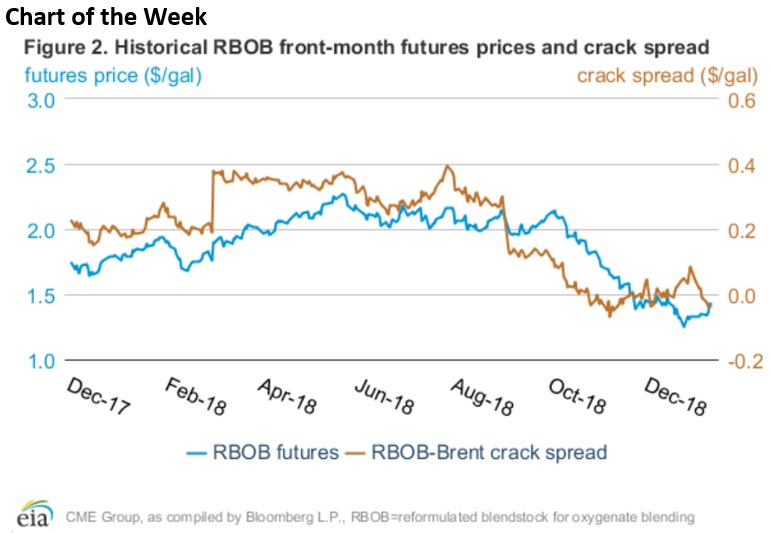 -    Gasoline margins have plunged in recent months as the glut of supply continues to worsen.
-    Refiners are churning out diesel because of the relatively higher margins, but that is exacerbating the glut of gasoline.
-    The turmoil in the products market is a reflection of the surge in supply of light crude oil from U.S. shale at a time when medium and heavier blends from the Middle East are being curtailed by the OPEC+ agreement.

After a selloff on Monday, oil prices steadied at the start of trading on Tuesday.
Oil drops on rig count and China concerns. Renewed concerns over Chinese growth weighed on crude prices on Monday, with WTI and Brent falling more than three percent. It was the largest single-day decline in a month. Meanwhile, the U.S. oil rig count jumped by 10 last week, a sign that the U.S. shale industry could be adding rigs back into operations. “We’re seeing oil prices really start to break down here,” Phillip Streible, senior market strategist at RJO Futures in Chicago, told Reuters on Monday. “One of the factors that played in is the rising rig count that we saw on Friday.”
Vice President Pence coordinated with Venezuelan opposition. The Wall Street Journal reported that U.S. Vice President Mike Pence was in communication with Juan Guaidó prior to Guaidó’s declaring that he was the rightful president. The report suggests that the U.S. effort at regime change in Venezuela has been underway for some time and is tightly coordinated. The Venezuelan military is sticking with President Nicolas Maduro for now, but the WSJ report suggests the U.S. government is determined to topple him.
U.S. announces oil sanctions on Venezuela. The U.S. has taken the long-anticipated move of sanctioning PDVSA, hoping to cripple the country and oust Maduro. The sanctions prohibit most American businesses from engaging in transactions with PDVSA. The measures put roughly 500,000 bpd of Venezuelan oil exports at risk. PDVSA, in theory, can reroute its shipments to Asia, but it will have to sell barrels at a much steeper discount. Citgo, the U.S.-based subsidiary of PDVSA, would be allowed to continue to operate, but its revenues will be diverted into a special account, presumably to be controlled by the fledgling government of Juan Guaidó. In the interim, the U.S. is trying to pry Venezuela’s oil revenues out of the hands of Maduro and steer them towards Guaidó.
Saudi Arabia pledges deeper cuts in February. Saudi oil minister Khalid al-Falih said that Saudi Arabia would lower its oil production in February to just 10.1 million barrels per day, down from 10.2 mb/d this month. The reduction would also be lower than Riyadh’s commitments as part of the OPEC+ deal – its limit is set at 10.33 mb/d. “Saudi Arabia will be well below the voluntary cap that we agreed to” and will produce below its ceiling “for the full six months” of the deal, al-Falih told Bloomberg.
Natural gas drillers cut spending. EQT (NYSE: EQT), Antero Resources (NYSE: AR) and Gulfport Energy (NASDAQ: GPOR) have cut their spending plans for 2019 amid a decline in natural gas prices and pressure from investors on returns. The U.S. shale gas revolution, more than a decade old, has failed to produce the juicy profits that have long been expected. Now, investors are clamoring for a shift in focus away from production growth, with a priority on shareholder returns. U.S. shale gas companies have badly trailed the S&P 500. EQT announced a spending cut of $700 million relative to 2018.
U.S. unveils criminal charges against Huawei executives. The U.S. government escalated its conflict with China on Monday, announcing criminal charges against Chinese telecom firm Huawei and its CFO, Meng Wanzhou. The U.S. charges that the firm has been trying to steal trade secrets for years while also violating Iran sanctions. The timing is not great since the U.S. and China are in the midst of trade talks ahead of a self-imposed March 1 deadline.
Permian shale drillers flaring more than they report. According to the Houston Chronicle, Permian shale drillers are flaring nearly twice as much natural gas as they are reporting to state regulators. In 2017, the industry reported flaring of 55 billion cubic feet of natural gas. But a separate analysis by the Environmental Defense Fund found that the industry flared about 104 billion cubic feet.
DOE to invest in recycling critical minerals. The rise of electric vehicles is breaking economic dependence on fossil fuels but could also open up a new dependence on critical minerals – cobalt, nickel, lithium, etc. – from a small number of places such as the Democratic Republic of Congo. The U.S. Department of Energy said it would invest more federal money into recycling programs to lessen U.S. dependence on these sources.
Chevron to purchase Texas refinery. Chevron (NYSE: CVX) has agreed to purchase a Texas oil refinery with a checkered past from Petrobras. The 112,000-bpd refinery in Pasadena, TX, would give Chevron an outlet for its surging Texas shale production.
Exxon to double the size of Texas refinery. ExxonMobil (NYSE: XOM) gave the go-ahead to double the capacity of its Beaumont, TX refinery. The refinery already has the capacity of 365,000 bpd, so the expansion would launch the facility into the top spot as the country’s largest refinery.
Total to expand exploration. Total SA (NYSE: TOT) said that it would launch its largest exploration campaign in years in 2019, an effort intended to focus on lower-risk resources in emerging and mature basins. The oil company said it was moving away from high-risk, high-reward “frontier” locations.

Nigerian Eurobonds Turn Bearish Ahead of US FOMC Decision