Oil prices plunged on Friday morning as China announced new tariffs on U.S. crude oil, the first time that U.S. oil exports have been brought into the trade war. 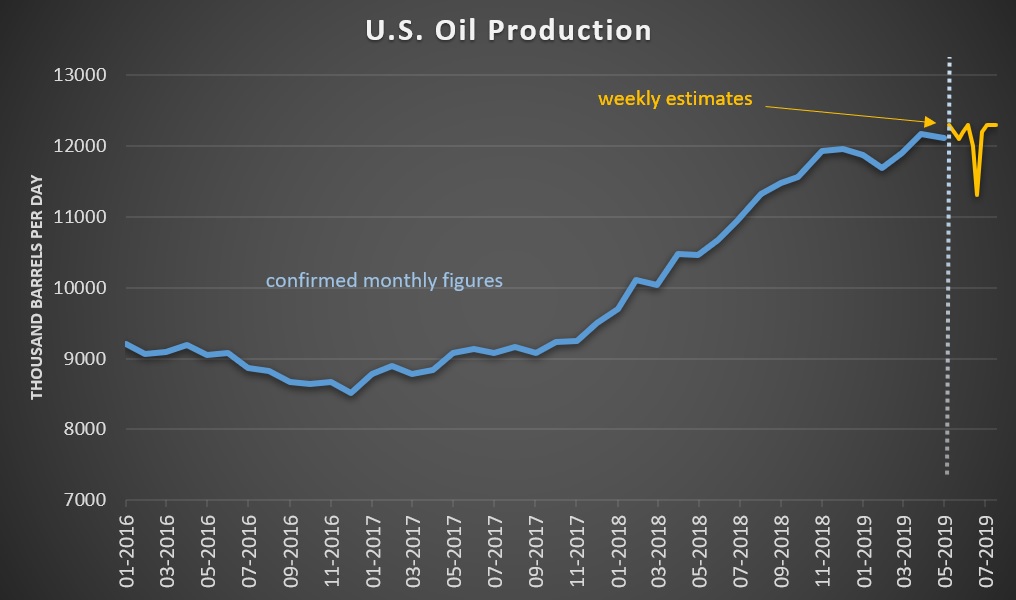 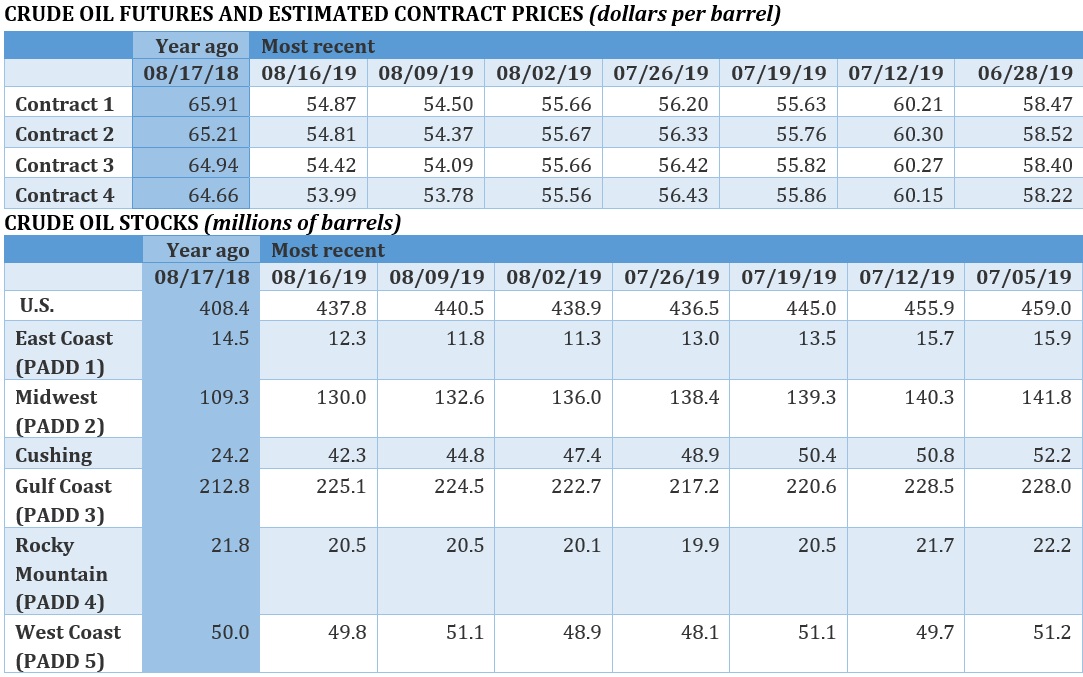 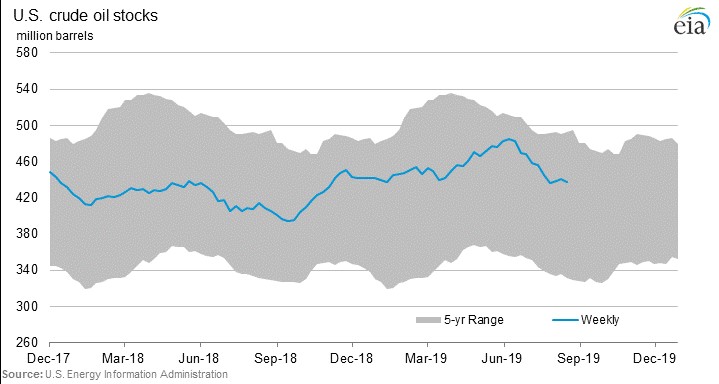 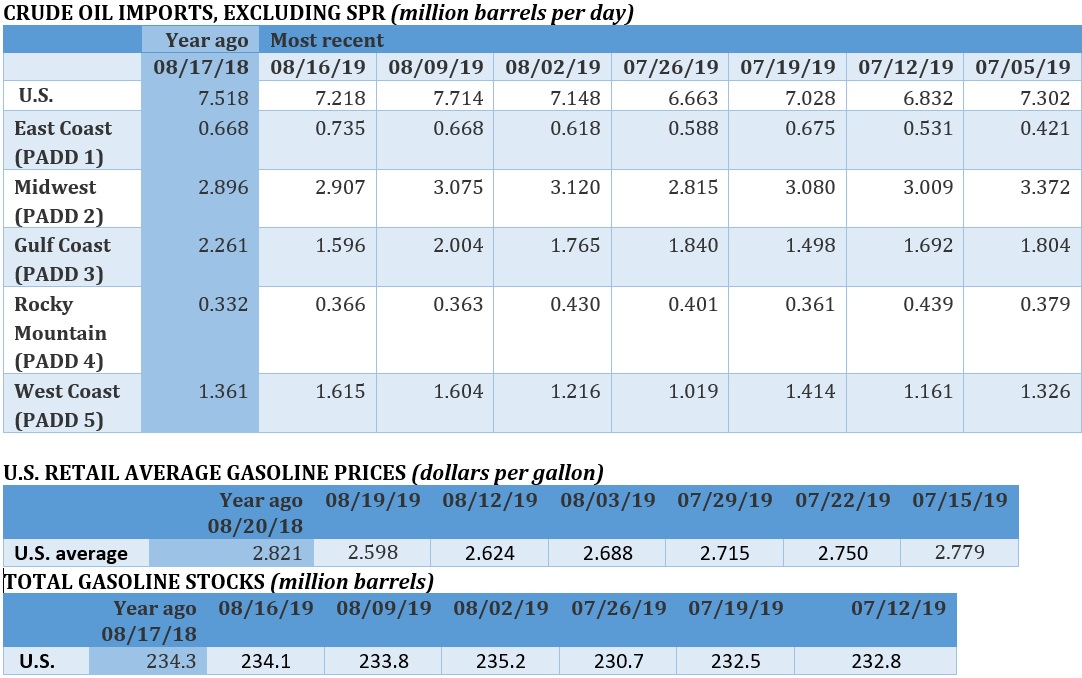 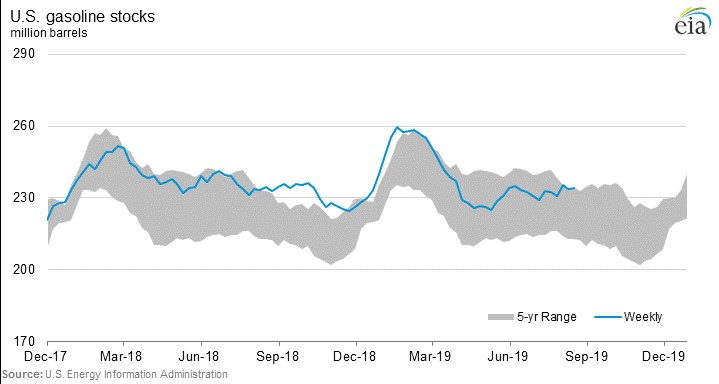 Friday, August 23rd, 2019
Oil plunged on Friday after China announced new tariffs on U.S. goods, including crude oil. The move reignited fears of economic recession. Meanwhile, global financial markets are closely watching the Jackson Hole symposium, an elite financial summit that may provide some clues into the thinking of the U.S. Federal Reserve.
Alberta extends production curtailments through 2020. Alberta extended the authority of its production cuts through the end of 2020 due to pipeline uncertainty. The move comes after the delay of the Line 3 replacement, which means midstream bottlenecks are likely to persist.
Oil producers battle pipelines over tariff surcharge. Plains All American Pipeline (NYSE: PAA) has slapped a surcharge on oil producers using its new Cactus II pipeline to offset the higher costs of steel due to U.S. tariffs. But ConocoPhillips (NYSE: COP) and Encana (NYSE: ECA) have requested that U.S. regulators shoot down the pipeline fee.
China's petrochemical expansion threatens others. A rapid increase in petrochemical production capacity in China could force producers in Japan and South Korea to cut production in the second quarter of 2020, according to Reuters. China is set to add 10 million tonnes of paraxylene capacity between March 2019 and March 2020.
U.S. says Iran exports fall below 100,000 bpd. U.S. State Department special representative for Iran, Brian Hook, said that Iran's oil exports have plunged below 100,000 bpd, although independent assessments from S&P Global Platts puts the figure closer to 450,000 bpd. "We have effectively zeroed out Iran's export of oil," Hook said during a press briefing in New York. "I can't overstate the significance of this accomplishment."
U.S. to add 61% of all new oil and gas. Over the next decade, the U.S. will account for 61 percent of all new oil and gas output in the world. The added output is set to â€œdrown the world in oil," Global Witness said in a report.
Natural gas hits 10-year low in Europe. Natural gas prices in Europe fell to a 10-year low as cheap LNG washes over the continent. Gas storage in many European countries is significantly higher than the five-year average.
Layoffs in Indiaâ€™s car industry. According to Reuters, declining auto sales is leading to worker layoffs and idling production in India. Auto sales have slumped for nine consecutive months in India, a sign of a worsening economy.
China unveils $75 billion in tariffs. China said that it would retaliate if the U.S. moves forward with the additional 10 percent tariff on $300 billion worth of goods, and on Friday announced plans for new tariffs on $75 billion worth of U.S. imports. The plans include an additional 5 percent on American soybeans and crude oil, which will go into effect in September, while a 25 percent tariff on cars will take effect in December.
Rosneft becomes oil trader for PDVSA. Russia's Rosneft has become the main trader of Venezuelan oil, moving it to buyers in India and China, according to Reuters. The move comes as traditional oil traders are steering clear of Venezuela because of U.S. sanctions. Rosneft took 40 percent of PDVSA's oil in July and 66 percent in August.
Rosneft to trade in euros. Rosneft has notified customers that future tender contracts will be conducted in euros, not dollars.
U.S. warns China away from Vietnam's oil. The U.S. warned China on Thursday against interfering with Vietnamâ€™s oil and gas exploration, highlighting the longstanding tension over territory in the South China Sea.
Pembina to buy Kinder Morgan's Canadian assets for $3.3 billion. Pembina Pipeline Corp. (NYSE: PBA) has agreed to purchase the remaining Canadian assets owned by Kinder Morgan (NYSE: KMI) for $3.3 billion. The deal gives Pembina a large source of oil storage in Edmonton and marks a major bet on the future of Canadaâ€™s oil sands. Kinder Morganâ€™s exit is another in a long line of divestitures by international oil companies from Canada.
Trans Mountain pipeline restarts construction. Now under the control of a government-owned entity, construction has restarted on the Trans Mountain expansion. The pipeline is scheduled to come online in mid-2022 barring more delays.
OPEC's market share falls to 30 percent. OPEC's market share is at its lowest point in years, even as the group stares down a supply glut in 2020, which may prompt even further cuts.
U.S. to sell 10 million barrels from SPR. The U.S. Department of Energy will sell 10 million barrels of oil from its SPR for delivery in October and November. The sale stems from previously passed legislation by the U.S. Congress.
Cube development can increase shale drilling returns. New research from Wood Mackenzie finds that cube development - drilling an entire section rather than individual wells - can increase present value (PV) by 30 percent in the Wolfcamp and Bone Spring. "Cubes won't work for every company. That said, they offer big benefits if executed to plan," Ryan Duman, principal analyst at WoodMac, said. But the approach also carries risk. "Investors need to be aware that the cube approach concentrates geographic and subsurface risk. And it doesn't completely eliminate the risk of child wells," Duman said. "Producing wells simultaneously can actually be more costly on a unit basis if the wells are not as productive as expected from overly dense spacing."
Brazil wants to privatize Petrobras. The Brazilian government wants to fully privatize Petrobras by 2022. Meanwhile, Petrobras CEO Roberto Castello Branco suggested that the company should end the use of production-sharing contracts, and instead shift to a concession model.

7.      Oil Price Risk Has Shifted To The Downside

Investors Gain N403.24bn WoW As NSEASI Inches Up By 3.25% To Close The Week Positive

Great Lake Region: The Economic Impact of Burying the Hatchet