Fears of a supply glut have gripped oil markets, sending oil prices down for the third consecutive week and forcing OPEC to consider a production reduction. 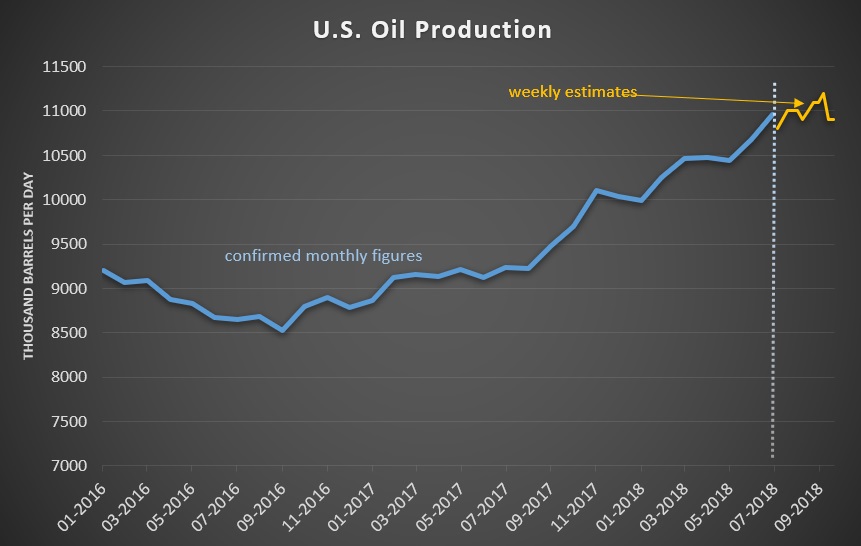 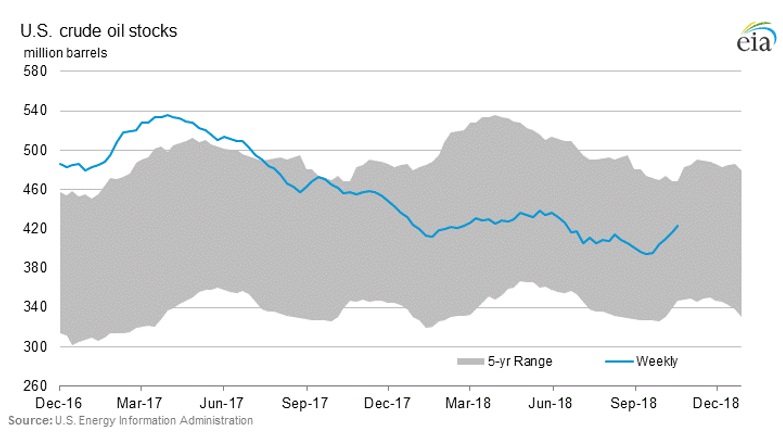 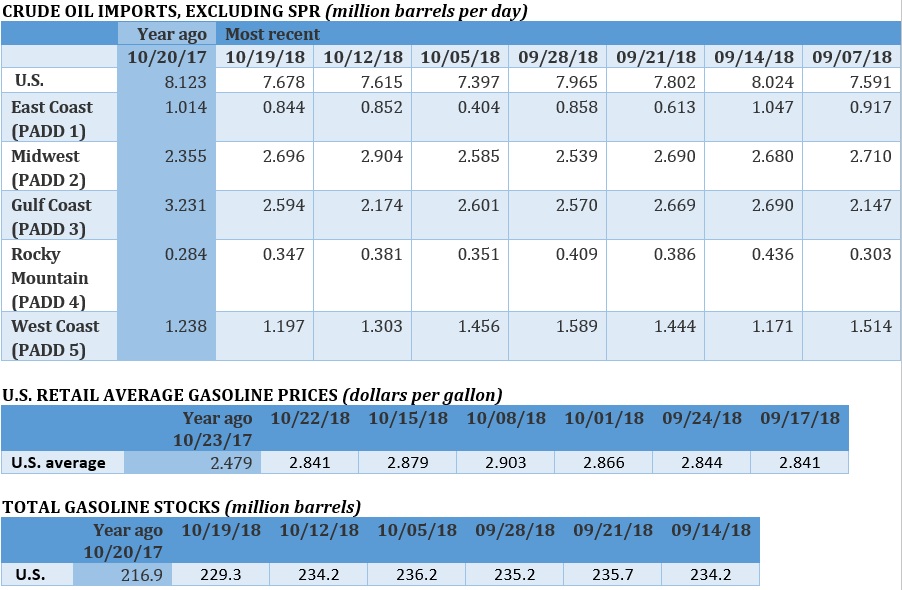 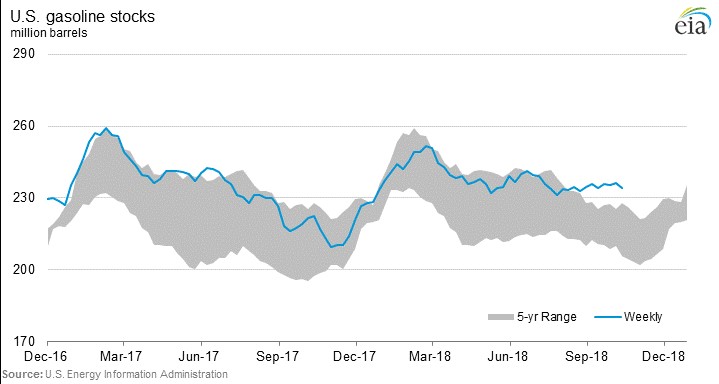 Friday, October 26th, 2018
Oil suffered steep losses this week on renewed fears that the supply surplus might make a comeback.

OPEC ponders production cut as inventories rise. The fears of $100 oil seem long gone. OPEC suggested that it might need to cut output in 2019 to avoid a return of the supply glut. There are some mixed messages coming from the cartel. Earlier this week, Saudi oil minister Khalid al-Falih said that the group was in “produce as much as you can mode.” But a technical committee offering recommendations to the OPEC+ group said that it would prepare “options” for production plans in 2019 to avoid a glut.

IEA urges more supply. Even as OPEC wonders whether or not it should cut output, the IEA pressed the cartel to increase production. “Global oil markets are going through a very sensitive period -- global economic growth as well,” IEA Executive Director Fatih Birol said in a Bloomberg interview on Thursday. “If the oil producers care about the health of the growth of the global economy, which I believe they do, they should take the steps to further comfort the market.”

Libya aims for 1.6 mb/d. The head of Libya’s National Oil Corp., Mustafa Sanalla, said that Libya is hoping to reach 1.6 mb/d by the end of next year, a level not seen since the days of dictator Muammar Qaddafi. Libya’s production has been volatile since 2011, but seems to be on the upswing, having recently topped 1.25 mb/d. “We’ve put together a plan to boost field production, including pipeline maintenance and addition of new pipelines,” Sanalla said. “We aim to reach 1.6 million barrels a day by the end of next year, and this level can increase.”

ConocoPhillips beats estimates. ConocoPhillips (NYSE: COP) earned $1.36 per share in the third quarter, up more than eight-fold from the $0.16 per share a year earlier. Conoco’s production in the Permian, Eagle Ford and Bakken rose 48 percent to 313,000 bpd. The figures were a vote of confidence in the shale patch, where companies have struggled to earn a profit.

New York AG sues ExxonMobil. ExxonMobil (NYSE: XOM) was hit with another lawsuit this week when the New York Attorney General sued the company for allegedly defrauding investors. The fate of the case is unclear, but the suit poses a legal challenge to the oil major. The NY AG argues that Exxon defrauded investors by “systematically” undervaluing the risk that the company faces from future climate regulation. Exxon said the lawsuit lacks merit.

IMO reaffirms 2020 marine fuel regulations. The U.S. has been trying to delay the implementation of regulations on maritime fuels beyond the January 1, 2020 start date. However, the IMO dismissed the effort, and said that the regulations are set to go ahead as scheduled. Beginning in 2020, maritime ships will have use fuels with sulfur concentrations of just 0.5 percent, down from the current limit of 3.5 percent.

Tesla turns surprise profit. Tesla (NASDAQ: TSLA) posted a third quarter profit, shocking Wall Street. It is the first quarterly profit in years, as well as its largest ever. Production of the beleaguered Model 3 increased in the third quarter, helping the company end several years of red ink. “I’ve said before that we must prove that Tesla can be sustainably profitable,” Elon Musk told reporters during a public conference call with analysts. “This quarter was an important step towards that.” The electric car maker earned $311.5 million in the quarter, up from a $619.4-million loss a year earlier.

Big Oil lobbies against EV infrastructure. The American Petroleum Institute, American Fuel and Petrochemical Manufacturers and Americans for Prosperity – three major oil lobbies – have weighed in at utility commissions in Illinois, Iowa and Kansas over the last few weeks, arguing against utilities investing in EV infrastructure, according to E&E News. Typically, an arcane affair and far out of the limelight, public utility commissions can decide whether or not to approve electricity rate increases for utility investments. The effort by the oil industry to block EV investments highlights their fear of losing market share as EVs proliferate.

Nigeria needs investment to keep production from falling. “Nigeria’s oil production is expected to remain stable in the short to medium term, with new projects offsetting the decline from mature fields. The timely development of these resources is seen as key for maintaining the country’s oil supply,” Rystad Energy said in a new report. Nigeria used to produce over 2 million barrels per day but instability has dropped that figure to about 1.7 mb/d. Production could return to about 2 mb/d in the medium-term but the timely development of new discoveries will be needed to keep production stable. Existing output is expected to erode in the years ahead.

U.S.-China trade negotiations hit a wall. The U.S. is refusing to resume trade talks with China unless the Chinese government puts forward concrete proposals on forced technology transfers, according to the Wall Street Journal. The roadblock undercuts the odds of a breakthrough when Donald Trump meets Xi Jingping at the G20 summit in Buenos Aires next month.

1.       The World Bank, Red Flags And the Looting of Nigeria’s Oil Revenues - The Seven Energy Web

3.      The Illogical World of Nigeria’s Oil And Gas Industry

8.     Move Aside Lithium – Vanadium Is The New Super-Metal