An Unexpected Rise in Headline Inflation in December 2020

The latest inflation report published by the National Bureau of Statistics (NBS) showed that December's headline inflation reading unexpectedly increased by 23bps to 15.63% y/y. The rise in the headline reading is the first after eight consecutive months of slowdown, mostly driven by favourable base effects.

Our expectations, shared with the local newswires was for a significantly smaller increase of 14.9% y/y, broadly in line with the MPC's and the market's 15% expectation for year-end. The broad thinking was that headline inflation would benefit from favourable base effects until at least Q1 '22. Data from the NBS show that the other two measures of inflation, food and core inflation also picked-up y/y.

The MPC has regularly underlined the impact of supply-side issues on food price inflation, the most prominent of which are widespread insecurity and infrastructural constraints. In its latest communique, a member lists other factors to include energy prices and exchange rate adjustments.

Indeed, we see gas and liquid fuels as some of the key drivers of core inflation, which inched up by c.2bps to 13.87%.

The NBS also tracks headline inflation by state, with the highest, 18.71% y/y, in Ebonyi and the lowest, 12.32%, in Kwara. It is worth noting that household baskets vary across states due to different consumption patterns.

The new inflation data contradicts the MPC's expectations of a decreasing trend in inflation, which had supported its no-change position.

Based on recent data, we think the MPC may be compelled to begin raising rates sooner than the market anticipates, probably at its next meeting later this month (January 24-25). This is even though supply-side factors are the dominant drivers of the uptick in inflation.

The tapering of asset purchases and impending rate rises by the US Federal reserve and other major central banks, as well as the likelihood of quantitative tightening by the US Fed later this year, are all factors in favour of possible rate hikes. 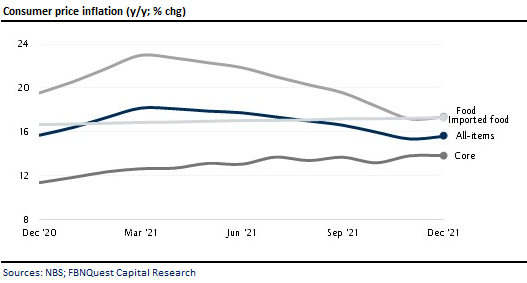 Interest Rate and Equities in 2022