The Monetary Policy Committee held its first statutory meeting of fiscal 2017 on 23rd and 24th January, 2017 against the backdrop of increased uncertainty arising from political and economic developments around the world.

Over the last few weeks the pillars of the old order - free trade, multilateralism and globalization have come under intense pressure, and seemingly giving way to an era of enlightened national interest in the conduct of international economic relations. On the domestic front, the economy remains in recession and inflation pressures have yet to recede. Both external and domestic conditions have blended to significantly complicate the policy environment.

In attendance at the meeting were all 10 members of the Committee. The Committee reviewed the global and domestic economic and financial environments in 2016 and the outlook for the short to medium term in 2017.

External Developments
The uncertainty in the external environment persisted owing to a combination of recent political and economic developments. The key issues include: Brexit, the rising wave of populist and anti-globalization sentiments anchored by emerging bilateralism, divergent monetary policy stance of the advanced central banks and disorderly commodity price movements.   With global output growth improving sluggishly, the outlook for 2017 remains unchanged owing to persisting uncertainties in commodity prices and volatility in the financial markets as well as slowing demand in the advanced economies and the emerging markets.

The MPC welcomed the modest increase in oil prices following the last OPEC decision to cut output and noted the increase in the policy rate of the US Federal Reserve Bank in December 2016 and the potential implications of that decision for international interest rates and capital flows. While noting the materiality of the output cut on oil prices, the Committee cautioned that the effect could rapidly wane, given the likelihood of a supply glut from non-OPEC members, low level of global economic activity and weak growth. Emerging markets and developing economies, in particular, have continued to confront strong headwinds such as low commodity prices, rising inflation, currency instability, intractable low aggregate demand and subdued capital flows.

Overall, the Committee noted that whereas improved commodity prices may provide modest tailwinds for resource-dependent economies in 2017, the medium-term outlook continues to be muffled by stagnation and uncertainty in the prospects for global trade, subdued investment and heightened policy uncertainty, especially in some major economies. Nevertheless, the IMF estimates that these constraints would decline; paving way for mild improvements in economic growth from 3.1 per cent in 2016 to 3.4 per cent in 2017.

Global inflation commenced a moderate but steady rise on the backdrop of improvements in oil prices and currency depreciation in several emerging markets. However, amongst the major advanced economies, only the U.S Fed has commenced policy tightening[1] while the Bank of Japan (BOJ), the Bank of England and the European Central Bank, all retained their accommodative policy stance at their most recent meetings.

Domestic Output Developments
Data released by the National Bureau of Statistics (NBS) in November 2016 showed that the economy contracted further by 2.24 per cent in Q3 2016, having slipped into recession following another contraction in output in Q2, 2016. Although the overall contraction in Q3 was greater than was observed in Q1 and Q2, the non-oil sector grew by 0.03 per cent in Q3, driven mainly by agriculture, which grew by 4.54 per cent.

The Committee is of the view that the key undercurrents i.e. scarcity of foreign exchange, low fiscal activity, high energy prices and the accumulation of salary arrears - cannot be directly ameliorated by monetary policy actions. The Committee hopes that the recent increase in oil prices would be complemented by production gains to provide the needed tailwinds to sustainable economic activity.

In that regard, the Committee commends the commitment of the fiscal authorities to step up efforts to fill the aggregate demand gap through a speedy resolution of the domestic indebtedness of the federal government to states and local contractors. The Committee believes that doing so will aid the effort towards economic recovery.

Developments in Money and Prices
The committee noted that money supply (M2) grew by 19.02 per cent in 2016, being 8.0 percentage points higher than its programmed limit. It underscored the necessity of keeping the economy adequately lubricated in the face of declining output. Growth in Net Domestic Credit (NDC) was 24.79 per cent at end-December 2016, being 17.94 per cent above its provisional benchmark for 2016.  Likewise growth in net credit to government, at 58.84 per cent, surpassed its programmed target of 47.4 per cent. In effect, all the major monetary aggregates exceeded their programmed provisional benchmarks for fiscal 2016.

The Committee observed the increases in the month-on-month inflation rate in November and December, in contrast to successive declines between June and September 2016. It noted that the structural factors driving the sustained pressure on consumer prices, such as the high cost of power and energy, transport, production factors, as well as rising prices of imports are yet to abate. Nonetheless, the Committee estimates that the current policy stance and other measures directed at improving food production would combine with base effect to usher-in some moderation in consumer prices in the short to medium term.

Money market interest rates fluctuated in tandem with the level of liquidity in the banking system. Thus, average inter-bank call rate, which stood at 15.34 per cent on 21st November 2016, closed at 9.90 per cent on December 30, 2016. Between these periods, the interbank call rate averaged 13.59 per cent. The average interbank call rate however, fell to 3.00 per cent on December 9, 2016, due to an increase in net banking sector liquidity to N495.48 billion on December 8, 2016, following the payment of statutory revenue to states and local governments as well as maturity of CBN bills during the period.

Total foreign exchange inflows through the CBN increased significantly by 82.45 per cent in December 2016 owing mainly to the increase in oil prices. Total outflows, however, spiked during the same period. The Committee noted that the average naira exchange rate remained stable at the inter-bank segment of the foreign exchange market in the review period.

Overall Outlook and Risks
The medium term outlook based on available data and forecast of key economic variables indicate a more resilient economy in 2017. Growth is expected to turn positive in fiscal 2017, as prior policy lags converge and the fiscal space becomes more accommodative. In addition, the agricultural sector is expected to play a bigger role in driving growth, given the expansion of the Anchor Borrower Program, as well as other developmental initiatives of the Government. Likewise, the prospects for moderation of price developments appear to be strengthening on the heels of positive developments in the food sub-sector.

The Committee identified the downside risks to this outlook to include the possibility of a slower-than-expected rate of global economic activity, fluctuating oil prices and production shut-ins due to vandalism of oil installations.

Summary of Considerations
The Committee re-assessed the headwinds which confronted the economy in 2016 and the opportunities for recovery in 2017. In particular, the MPC evaluated the implications of the rising wave of nationalistic ideologues across the West, the re-evaluation of trade agreements and the possibility of rapid monetary policy normalization in the United States, with adverse consequences for other countries, including Nigeria. The uncertainties underpinning the implementation of Brexit and the apparent retreat from globalisation and free trade were also important points of reflection.

In recognition of the seemingly inevitable structural shift in the global economy, the Committee reiterated the need to be more inward looking and hasten efforts towards economic diversification to support the domestic economy and improve life for the Nigerian people. Consequently, members acknowledged the imperative of sectoral policies and greater coordination of monetary and fiscal policy.

Conscious of the prevailing market sentiments in favour of a rate cut, the Committee reasoned that most of its decisions in 2016 were informed by the need to address the delicate balance between price stability and growth. Noting that the pressures on consumer prices were yet to abate and even as the economy continued to be in recession despite the intervention support by the Central Bank, the Committee stressed that it was not oblivious of the full ramifications of the economic challenges facing the country.

The MPC was concerned that the current situation was not amenable to simplistic analyses and quick fixes such as have found expression and increased attention at different fora and the media.

The domestic economic challenges which include a chronically import dependent consumption culture, lack of competitiveness of many sectors of the economy and yawning infrastructural gap, have combined with an unfavorable external environment to complicate the macroeconomic policy environment.

The Monetary Authority had on many occasions, and to the extent feasible, taken extra-ordinary steps to support other policies as well as compensate for aspects of structural gaps in the economy even at the expense of its core mandate.

The Committee specifically noted the positive contribution of agriculture to GDP in the third quarter, mostly attributable to the Bank’s interventions in the sector. The Committee hopes that given the thrust of the 2017 budget and accompanying sectoral policies, output growth should resume in the short to medium term.

The MPC, therefore, lends its voice to efforts for an early finalization of the 2017 Federal Budget by the authorities concerned, and the resolve to pursue a non-oil driven economy, as these will go a long way in stimulating aggregate demand and restoring confidence in the economy.

The Committee also urged the authorities to seriously consider using the Public Private Partnership (PPP) model in its infrastructure development programme as a means of cushioning any possible shocks to budgeted revenue.

The Committee further noted that Inflationary pressures would begin to subside as non-oil output recovers and the naira exchange rate stabilizes.

Until then, it stressed, a rate cut would worsen the inflationary conditions and undermine the current outlook for stability in the foreign exchange market. The Committee also feels that doing so would further aggravate demand pressures while undermining existing income levels in the face of the already expansionary monetary policy and increasing inflationary pressure which will make the economy unattractive for foreign and domestic investment. Given these limitations, the Committee was reluctant to lower the policy rate on this occasion but remained committed to doing so when the conditions permit.
From a financial stability standpoint, the Committee noted the possible impact of the inclement macroeconomic environment on banking sector resilience. The MPC urged the Management of the Bank to engage industry operators to discuss likely issues of asset quality, credit concentration and high foreign exchange exposures.
Given the growth in money supply arising from unconventional monetary policy operations of the Bank and implications for price and exchange rate developments, the Committee is committed to moderating growth in narrow money in the 2017 fiscal year in line with the Bank’s monetary growth benchmarks.
The Committee’s Decisions

The Committee, in consideration of the headwinds in the domestic economy and the uncertainties in the global environment, decided by  a unanimous  vote  to retain  the MPR at 14.0 per cent alongside all other policy parameters. In summary, the MPC decided to:

Thank you for listening. 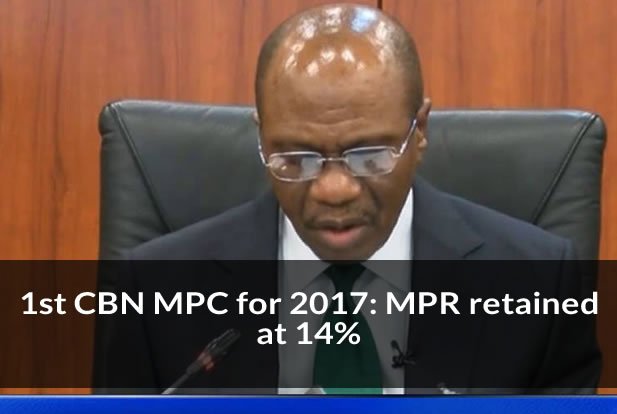 25.  Personal Statements of Members at the 101 meeting of the MPC

MPC Again Plays The "Do Nothing" Card