An Excellent Start for the DMO in January 2022

The DMO's first auction of the year which was held last week kicked off on a good note. The DMO aimed to raise NGN150bn from the investing public. However, it ended up raising NGN171bn, 14% higher than it initially offered. The success of the auction is underscored by the fact that It attracted total bids of NGN325bn, over twice what it offered for the two benchmarks on offer the Jan '26 and Jan '42.

While the former benchmark was a re-issue of an existing bond, the latter (Jan '42) was a completely new issue. The marginal rate for the Jan '25 at 11.5% was 15bps lower than it closed the previous month. The Jan '42 closed at a marginal rate of 13%. Despite the fact that it was a new issue with no exact comparables, we observe that the trend was generally downwards.

We understand that anticipated liquidity from the large number of maturities due this month influenced cut-off rates.

The DMO has ever-willing takers of its papers in the PFAs. According to PenCom's most recent monthly report, FGN debt securities accounted for almost 63% of total PFA AUM.

Even though FGN bonds generate real negative returns when inflation is taken into account, the PFAs have little or no alternative due to the scarcity of qualified investible securities.

Similar to FY '21, the DMO has another onerous domestic funding target of c.NGN2.5trn to meet this year. Based on antecedents, we would not be surprised if the DMO's funding target is further increased via the passage of a supplementary budget.

Given recent external sector developments, tighter credit access which are bound to raise borrowing costs for emerging and frontier market nations may mean a higher reliance on domestic institutional investors by the DMO, especially if external market conditions get extremely unfavourable.

Consequently, we continue to believe that yields will trend upwards this year. 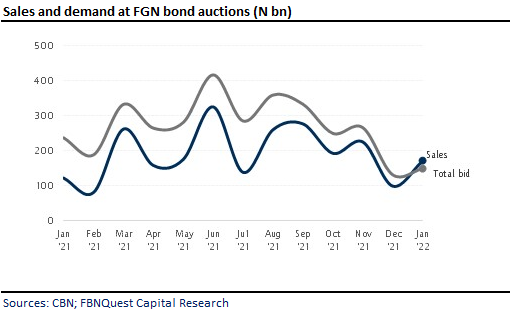 Nigeria's Economic Outlook for 2022: Businesses and Households in Nigeria Will Fare Slightly Better

MPC: Nigeria Should Pay Attention to Growth, Rather than Inflation - Biodun Adedipe